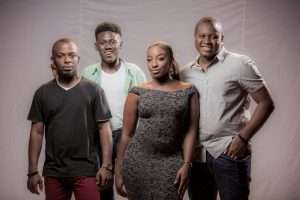 After years of hiatus, TV3’s ‘Mentor’ is back with much more excitement and fresh new talents given a platform to showcase what they have.

Dubbed ‘Mentor Reloaded’, the newly launched music reality show, which airs on TV3 every Sunday at 8:00pm, has outdoored 16 talented contestants for the maiden edition.

From rappers to singers, all 16 contestants were carefully selected after weeks of rigorous audition.

The contestants have been grouped into teams to be mentored by four experienced musicians who will take them through the nitty-gritty of music throughout the 13-week competition.

Award-winning songstress Adina has Aemma, Missy, Evance and Optional King under her care as she is responsible for mentoring them throughout the competition.

Emmanuella, 24, with stage name Aemma lived most of her life singing until she gave up on her dreams when she became a mother. With the reloaded mentor in sight, Aemma saw an opportunity to pick herself up again and give her music career another try. She is hopeful she will make it far in the competition.

Born Hannah Akua Sonkobea Nyarko, 24-year-old Missy is a product of the Commonwealth Senior High School. Listening to music and singing is her hobby.

B Vanny is from a family of four and hails from Kwahu-Obomeng in the Eastern Region. Calm and collected, Evance likes to listen to music and watch movies.

Mohammed Lukman, known by his stage name as Optional King, is a hiplife/hip-hop recording artist. The 20-year-old is a native of Tamale. He is passionate about music, and loves football as well.

Rapper Edem has Taabea, Myka, Eli and Jedy under his wings, with the singular task of mentoring and grooming them.

Gifty Taabea Bediako is a 25-year-old graduate of Radford University College with a BSc in Business Administration. Her musical journey began at the age of 10 when she wrote her first song inspired by a war documentary. She looks up to the likes of Asa, Toni Braxton, & Kojo Antwi. Taabea is passionate about music, photography and fashion, and believes in empowering others to succeed in life through her music.

Eli Letsa is 25 years of age, and is from the Volta Region of Ghana. He loves to sing, cook and watch movies. Some of the great musicians he admires include Michael Bolton, Whitney Houston and Luther Vandross.

28-year-old Solomon Poku-Asare Jnr is an Architectural Drafting and Design Facilitator at Asuansi Technical School. Jedy, as he is known in the competition, draws inspiration from Alpha Blondy. His musical journey began at a very tender age in the church.

Award-winning sound engineer Apietus has a group of four to mentor in the competition.

Grace Amoo-Boateng, popularly known in the music circle as Bennada, was born and bred in Accra. She began her singing career in the church choir at the Assemblies of God Church at the age of 7. The vision and passion of Bennada is to challenge the status quo to take gospel music from Ghana across the globe.

Chichiz is a rising act with multiple awards in street rap and radio battles from the Western Region. Music for him started from his high schools days where he dazzled the entire school with mind-blowing performances any time he mounted the stage.

Yaw Blvck, born George Somuah Gyamfi is a 24-year-old singer. For Yaw, his music is an escape for him.

SamBryt is a rising act who has always been passionate about music. His musical journey began in high school. He started recording professionally in the year 2017. Born Samuel Bright Nyarko, the 24-year old is from Takoradi in the Western region. His music is inspired by the Mali Music, Beyonce and Knii Lantey.

Dufie, born Mayfred Sarkodie, is from Poano in the Ashanti Region. She is a graduate of Completed Serwaa Nyarko Senior High School and a beautician by profession. She loves to write songs, perform and read.

Born Eric Adu, Kobi Kobbs is a 34-year-old singer who has had passion for music and dance right from infancy. Coming from the Ashanti Region, he intends to show the world his gifted talent and hopefully emerge winner of Mentor Reloaded.

Emmanuel Owusu with stage name Kweku Darlington is a 23-year-old singer and rapper. He started doing music at the age of 14, and music has been the source of his joy since then.

With 13 weeks to show what they have got to offer music enthusiasts in Ghana and beyond, these 16 talents will battle it out for one person to emerge winner.

Six contestants are now in the running for the ultimate prize of a two-bedroom house in this year's Mentor Reloaded...

After her exit from the TV3 Mentor Reloaded reality show last Sunday, Frema Baby prayed and hoped for a miracle....