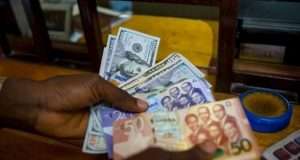 Chief Operations Officer of Dalex Finance, Joe Jackson, has accused the two leading political parties in the country for deliberately working towards sabotaging the economic fortunes of Ghana.

According to Mr. Jackson, both the National Democratic Congress and New Patriotic Party have failed in finding long term solutions to the yearly depreciation of the cedi against major international trading currency, particularly the dollar.

“I know that the two parties have conspired to sabotage the economy,” he said.

He made this observation on TV3 news analysis show, the Key Points on Saturday, and accused the parties of politicizing the cedi issue to gain political points instead of coming up with long term measures to deal with it.

I was disrespected by Asiedu Nketia – Koku Anyidoho

NDC sues EC over plans to register voters on Thursday

The Dalex Finance COO further stated that the two parties are always quick to speak through the media on issues of the depreciating cedi instead for coming together to dialogue and come up with plans with which the issue can be solved to prevent further recurrence.

“Each time the cedi depreciates in value, it is a signal telling us that there is not enough dollars to fund what we want do, so it is either we export more or we consume less dollars each time that signal happens.

“…both sides [NDC and NPP] are quick to use the cedi as the barometer or thermometer for political performance, the action is to jump in support of the cedi and sabotage that economic signal that goes to all investors, producers, consumers to take decisions that will fix this in the long term,” Mr. Jackson noted.

According to him, investment decisions and issues bordering on the cedi cannot be taken within two months or short term as is  done by the two parties, indicating the NPP and NDC must pay attention to cedi signals and plan along those lines.

“So I think that by jumping and celebrating any time the cedi slides, they are actually sabotaging our long term existence, and I want all of them, whether the script was read by Dr. Bawumia a year ago or the script is being read by Honourable Forson this time or whoever it is, it is the same script, and the script tells us that we are ignoring the economic signal that the cedi value is passing, and it totally ignores how to fix this in the long term.”

Joe Jackson was speaking on the back of a news conference organized by the minority on the economy, as well as the response from government on the issue.

The minority at the said news conference accused government of failing to stabilize the economy, thereby scaring investors away from the country.

Addressing the issues raised by the minority, Information Minister Kojo Oppong Nkrumah said they are nothing new, and that government was already working towards resolving them.

Mr. Jackson rejected the assertion by some analysts that doing business or selling goods in dollars is the cause of the depreciation of the cedi.

“As soon as the dollar takes a dip, instead of asking what this is signaling, all we do is jump in and distort the signal, sabotaging the market,” he stressed.

He noted that the dollar is only a model, and that pricing in dollars is a way of increasing prices.

Mr. Jackson also said the real problem is that local production is noncompetitive, arguing it is cheaper to buy foreign goods than local goods.

I was disrespected by Asiedu Nketia – Koku Anyidoho

NDC sues EC over plans to register voters on Thursday