When Kwesi Appiah’s time as coach of the Black Stars is done, he will probably look back on a storied past and wonder if it was all worth it. Whether it would have been better to stay in London instead of answering that call in 2009 to serve his country. He would not have had to worry about some bloke behind a keyboard who had never taken to any coaching course or coached any team before, but would run the rule over his work as though he were some expert. Or worry about some college student’ who borrowed from MTN QWIKLOAN to buy data just to be able to tweet that he – Kwesi Appiah – was wearing a bed sheet in the name of a shirt on the bench. Instead, he would wake up to steaming hot coffee, served by the woman he loves, in the kind of garment that render all men – rich or poor, young or old – powerless. He could have spent the rest of his days guiding his children through life, giving his family the future they deserve. His legacy. Instead, he left behind the comfort and tranquility of Stratford, East London, to navigate the choppy waters of coaching the Black Stars. He answered that call and said yes. For one last adventure. After all, what is life without some adventure? And because of that adventure, Kwesi’s legacy will not be just about his family. Neither will it be an amazing playing career that saw him win the CAF Champions League and the Africa Cup of Nations, while captaining both Asante Kotoko and the Black Stars along the line. Rather, quite unfairly I might add, all of that often gets forgotten. Call it recency bias or the recency effect at work. But Mayele’s story will heavily be influenced by the events of the last ten years and there has been a lot in that time. The present event is an intriguing one. Even before it began, Kwesi and his team threatened to self-destruct. Like lysosomes. Kwesi had informed Asamaoh Gyan he would no longer be captain of the team. Swansea City forward Andre Ayew was to take over from him while he was ‘elevated’ to the role of a ‘General Captain’. It may mean something else in another jurisdiction, but in Ghana, it is nothing more than a glorified demotion and Gyan knew this. He would have none of that. In anger, he released a badly worded press statement announcing his resignation, stating he would not play for the country again since he would no longer be captain. Gyan’s anger was understandable. He had backed Kwesi Appiah on several occasions and went as far as making a case for Mayele to be handed a fourth opportunity – although in truth, he was the only plausible choice given the sports ministry’s adamance  towards spending big. Then there was the much talked about rivalry he had with Andre. So to have been stripped off the captaincy in that manner felt like a betrayal. But just like former president John Mahama did in the case of Andre Ayew when he retired, just like former president Kufuor did in the case of Gyan in 2008, president Akufo-Addo intervened and Gyan rescinded his decision. It was box office stuff. But it was also needless, the whole episode. A petulant rant from Gyan, a predictably needless intervention from the president who continued a bad precedence set by two of the three former presidents, polarized media coverage of the event and perhaps a questionable decision on Appiah’s part. But, when the team touched down in Dubai, Kwesi Appiah told reporters, this was the best Black Stars camp ever. That was a big claim to make. In truth, there was nothing that proved otherwise. Not even a hint of tension or anxiety. 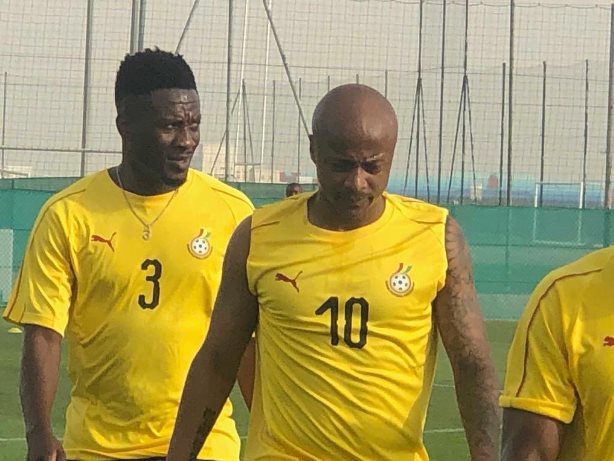 Yet, when the tournament started, the team looked anything but a group from the ‘best camp ever’. They looked dysfunctional. It was difficult to tell what they wanted to do. Not that Appiah’s team have ever had any distinct playing style anyway. And it’s not as if this team was supposed to match the control and authority of Pep Guardiola’s Barcelona in 2011 or the flair and expressiveness of the “Jogo Bonito”. None of that. They had one job; win. And they failed. From coach to all 14 players involved in the game, save Jordan Ayew. The full backs huffed and puffed but in the end offered nothing significant in attack and were not convincing at their primary responsibilities too. The whole point of tactics is to, for as much as possible, reduce the scenarios that benefit’s opponents in any way, while creating an enabling environment for your team to thrive. Watching the game, it did not look like we had one. When they chose to pass, there were not enough options around or coordinated movements anywhere near to force spaces to open up or any decent passing options to pick from. When they went long, the radar was often off. It did not look like they had scouted or had any prior knowledge of what Michel Dussuyer – the Benin gaffer – would do or even how he sets his teams up. The sequence of play in the opening 5mins buttress this point. Without having any sort of control or dominance on the game, the backline pressed very high up the pitch. Now there is nothing wrong with that except that when you push that high up the pitch, you have to keep the ball better and be coordinated in your pressing. That allows you a good structure and numbers in relevant areas. Without that, you’re susceptible to counter breaks. Appiah’s men did none of that and were punished by Pote. But even still, we all – fans and journalists alike – hoped they would manage to somehow grind the result. It did not happen. Leaving more doubts about the team and its manager. For a team that made the semis of every AFCON since 2008, finishing as runner up twice – in 2010 and in 2015 – there is not much the Black Stars can prove. Except to prove it can trump its previous achievements – that is if there are any at all. Here in Ghana, many fans do not believe the Black Stars can do that any better than they have managed in the last eleven years. There is lesser hope, still, in Kwesi Appiah and his methods. As things stand now, Kwesi Appiah’s legacy as Black Stars coach is perilously close to being on life support. What happens in the game versus Cameroun will determine whether it’s on life support or he has a lifeline. [caption id="attachment_124447" align="aligncenter" width="480"]

Coach Kwesi Appiah[/caption] How does he hand himself this lifeline? In the context of  what would he enough to qualify from the Group Stage, any result at all would do. It may not be what Ghanaians would want, but even a draw might be good enough if only the Black Stars will beat Guinea Bissau in their final group game. Surely it is not beyond the Black Stars to get a result or even snatch a win from the Indomitable Lions. They are capable of it. If there is one thing that is certain about the Black Stars , it is that they live for moments like this. They revel in them and it does not matter the circumstances or the opposition, they always turn up. In 2010, the tragedy of Cabinda meant Ghana would play one game less than scheduled. After suffering a humiliating 3-1 defeat to Ivory Coast, Milovan Rajevac’s team beat Burkina Faso 1-0 to qualify out of the group. That proved to be the catalyst the team needed and even though Ghana were missing  Stephen Appiah, Michael Essien, Sule Muntari and John Mensah it did not matter. The team went further than when they were present, only losing to an 85th minute goal from Gedo for Egypt. Four years later, a more settled but distracted Black Stars lost to the United States of America by the odd goal in three. Amid reports of player revolt over unpaid bonuses, Ghana prepared to face Germany. Die Mannschaft had dispatched the Cristiano Ronaldo led Portugal in ruthless fashion, spanking them for four. For any other country, that was your recipe for disaster. But this was no other team. This was the Black Stars. We flirt with danger, even burn a bit. But like Phoenix, we rise from the ashes – never mind however brief, that rise would be. What happened next was beyond description. Ghana held Germany in a breath taking  2-2 draw in a game many believed was the best game of the tournament. In 2015, Ghana needed to beat highly fancied Algeria after losing to Senegal. What happened next? Asamoah Gyan happened. The malaria stricken Gyan happened and none of Sofian Feghouli, Nabil Bentaleb, Islam Slimani and Yacine Brahimi – who was the BBC African footballer of the year – could stop Ghana who would go all the way to the final, losing only on penalty shootout. While the players may not be at the same level they were during those feats, reality is that our opponents aren’t either and Cameroun’s success in 2017 happened more by accident than the result of meticulous planning that had birthed a team at the peak of its powers. And for an adversary, they have suffered some painful losses to, which other motivation do the Stars need to shine brightly? It remains to be seen how Kwesi Appiah will approach this test. No matter how many clips of Cameroun I watch, I cannot lecture Kwesi Appiah on which tactic best  fits this test. I could say Partey needs more freedom and has to play in an advanced role. Ora pattern of play that creates overload on one side of the pitch while retaining a 1v1 for the teams best dribbler on the opposite flank. Or to press Cameroun – who are hardly press resistant – in a disciplined, coordinated manner with the hope of hounding them into mistakes and picking them off. All of that would be nothing but pure guess work with no guarantee of success. Kwesi’s job though is to guess right and get the job done.  Of course if he fails, he may get another chance versus Guinea Bissau. So it is tempting to think of this as just another match. Kwesi Appiah himself might even believe that and you would have to respect that. It is just another match. Just as the Monalisa is just a painting and the Sistine Chapel is just a temple!

GWCL says measures are in place to ameliorate impact of Bagre...