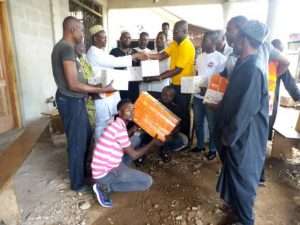 The donation came as a result of a request which was made through the Electoral Area Coordinator of  Bibiani Newtown, Mary Darko, barely two months ago.

As usual of him, Mr Obeng Boateng decided to honour the request during their Eid-Adha celebration.

Donating the items on behalf of the philanthropist, who also doubles as the CEO of Approachers Group of Companies, Halifax Amande, the Secretary of Friends of Approachers, told the beneficiaries that the peace that Western North Region and Ghana as a whole had been enjoying since time immemorial is partly due to the unity and brotherly relationship between Muslims and Christians and therefore all should be proud and continue deepening such relationship.

He further stated that next year is another election year and they should assess the previous government’s performance and compare it with the current one to make an informed decision and nothing else.

He continued that every individual wants progress, so election violence should be a thing of the past.

The Chief Imam extended his profound gratitude and appreciation to Mr Obeng Boateng for his annual donation in different kinds to the Muslim community in Western North Region.

He also assured him that at the opportune time they will also honour him.

It would be recalled that the former BOST boss has made several donations within the region and has positively changed so many lives.

He recently donated a 110KVA power plant to the Bibiani Government Hospital at the cost of GH¢170,000, three brand new Nissan Hardbody pickups to the Bibiani, Bekwai and Wiawso Police Commands at the cost of GH¢525,000, one brand-new Nissan Hardbody pickup for the Western North Secretariat during the campaign for the creation of Western North Region, 350 dual desks to some basic schools in the Bibiani- Anhwiaso-Bekwai Municipality, Electronic Hospital Beds to Chirano Community Clinic, Provision of building materials for Classroom blocks, among others. 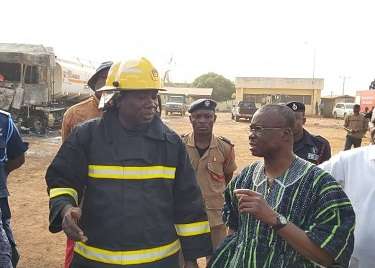 A fire outbreak that occurred at the Bulk Oil Storage and Transportation Company Limited (BOST) last Friday led to a...

Deal with the rot at BOST – Gov’t told