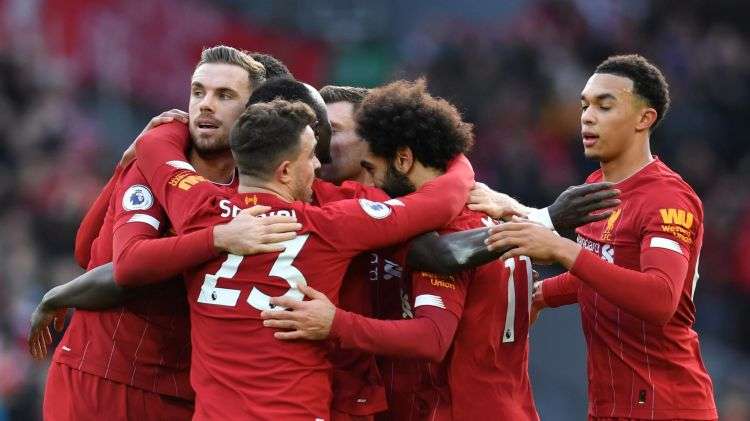 Liverpool were crowned champions of England for the first time in 30 years after Manchester City lost to Chelsea.

Only a win for City at Stamford Bridge would have allowed them to hold on to the Premier League trophy for a little longer and their two-season reign is now officially over.

Pep Guardiola’s side lost a total of six league games in those two seasons combined, but their eighth defeat of this campaign leaves them 23 points behind the leaders, with seven games left.

Kevin de Bruyne’s brilliant second-half free-kick cancelled out Christian Pulisic’s breakaway goal for the hosts but Liverpool’s title was confirmed with 12 minutes left when Fernandinho was sent off for handball on the line and Willian dispatched the resulting penalty.

While City are still in the Champions League and continue their defence of the FA Cup at Newcastle on Sunday, their next act in the league will be as part of Liverpool’s coronation when they welcome the Reds to Etihad Stadium next Thursday.

The outcome of this season’s title race has been inevitable for many months but Liverpool’s long wait to wrap up their 19th triumph, extended by the Premier League’s three-month break amid the coronavirus pandemic, is finally over.

City’s hopes of delaying them further ended in all-too familiar fashion, with crisp passing and forward moves undermined by fragile defending and lapses in focus.

They had been the better side until they gifted Chelsea the lead courtesy of a terrible mistake by Bernard Mendy after Chelsea had cleared a first-half free-kick.

The France left-back had Ilkay Gundogan in support but was far too casual as he gave Pulisic possession near the halfway line, then compounded his error by diving in and allowing the American to sprint clear and slot home.

De Bruyne’s brilliant dipping free-kick arrowed into the top corner to bring City level shortly after the break and they almost took the lead moments later when Raheem Sterling hit the post after a stunning counter-attack.

Chelsea went close at the other end when Fernandinho let Pulisic in and he rounded Ederson, only to be denied by a brilliant goal-line clearance by Kyle Walker.

That was a huge let-off for City but they were not so lucky the next time Chelsea came forward.

Ederson denied substitute Tammy Abraham and then Fernandinho blocked Pulisic’s follow-up but the video assistant referee confirmed what everyone watching on TV had already seen – that he had used his hand to clear.

Referee Stuart Attwell showed the Brazilian a red card after pointing to the spot, and Willian planted his spot-kick into the net to ensure the night belonged to Chelsea – and Liverpool of course.

While this was a momentous result at the summit of the table, it was also hugely significant in the race for the top four.

Chelsea have seen Manchester United and Wolves close the gap this week but this was a convincing response, and not just because of a result that moves the Blues five points clear of the teams immediately below them.

They showed impressive resolve and organisation at the back in the spells when City were on top, but also always looked dangerous at the other end.

Pulisic’s pace on the break was a big part of that but Chelsea carved out plenty of other chances, with Ederson brilliantly denying Andreas Christensen and Mason Mount wasting a glorious opening from a poor clearance by the City keeper.

Manchester City have successfully overturned their two-year ban from European club competitions. The Court of Arbitration for Sport (Cas) announced...