Goosie Tanoh is seeking the mandate of the NDC delegates to lead the party into the 2020 general elections[/caption] Aspiring presidential candidate of the National Democratic Congress, Goosie Tanoh, has joined calls for an independent probe into the violent incident at recorded near a polling station in the just ended Ayawaso West Wuogon by-election. Describing the episode as embarrassing to the nation, Mr. Tanoh wondered why government would invest in vigilantes and other security groups whereas there is constitutionally established Police Service and military which lack resources. “What happened is clearly unacceptable. There must be a swift investigation into the violence that would lead to disbanding vigilante groups,” he said at the end of his campaign tour of the Eastern Region. Gun-toting men in black and khaki trousers stormed the residence of the NDC candidate in the by-election and allegedly fired shots injuring at least six persons and disrupting temporarily, voting at the La Bawaleshie Presby polling station which was a stone throw from the house.

Some of the men were alleged to have assaulted the Member of Parliament for Prampram, Sam George, for questioning the violent shooting incident that forced the National Democratic Congress to pull-out of the by-election won by the New Patriotic Party candidate. Various civil society groups and organisations including the UN agency for development, the UNDP, have unequivocally condemned the violent acts of the hooded men, and warned Ghana against complacency over its touted peaceful atmosphere.
READ ALSO:  Boko Haram 'technically defeated' in Nigeria
The minority in parliament, CHRAJ, NCCE and other civil society groups have all called for an independent probe into the incident by the masked hooded men who are said to be national security operatives. Vigilantism; the monster to eat you up Adding his voice to the calls for a probe, Mr. Tanoh suggested that the investigation be extended in scope to cover acts of vigilantism, which have permeated the country’s politics and currently churning out acts of lawlessness. From his perspective, the teeming unemployment, and what he described as economic crisis, are what has encouraged the people, mostly the youth into these vigilantes. “Many of these vigilante groups are formed and sponsored by political parties. After a while, they assume power and begin to terrorise people. It is irresponsible to encourage that” he stated without equivocation. Mr. Tanoh indicated that politicians spearheading vigilante groups in the country will eventually become prey to these same groups, saying “The politicians who are sponsoring them [will] become victims of monsters they are creating”. The aspirant expressed worry over the issue of vigilantes, which many security experts have warned could threaten the country’s democracy and peaceful atmosphere, particularly in the 2020 general elections. He cited Rwanda and other countries which have suffered from similar political violence as an example and urged Ghana to take lessons from them. “Knowing the genocide and the toll it had on sister African countries, we cannot afford a situation of disrupting our peace,” he stated. What I have for you Meanwhile, on what he would do should he be given the mandate of the party, Mr. Tanoh promised a new and fully energized NDC to win the 2020 elections. “I Promise you a new NDC fully energized commitment to uplifting the grassroot support and a new national revolution”. 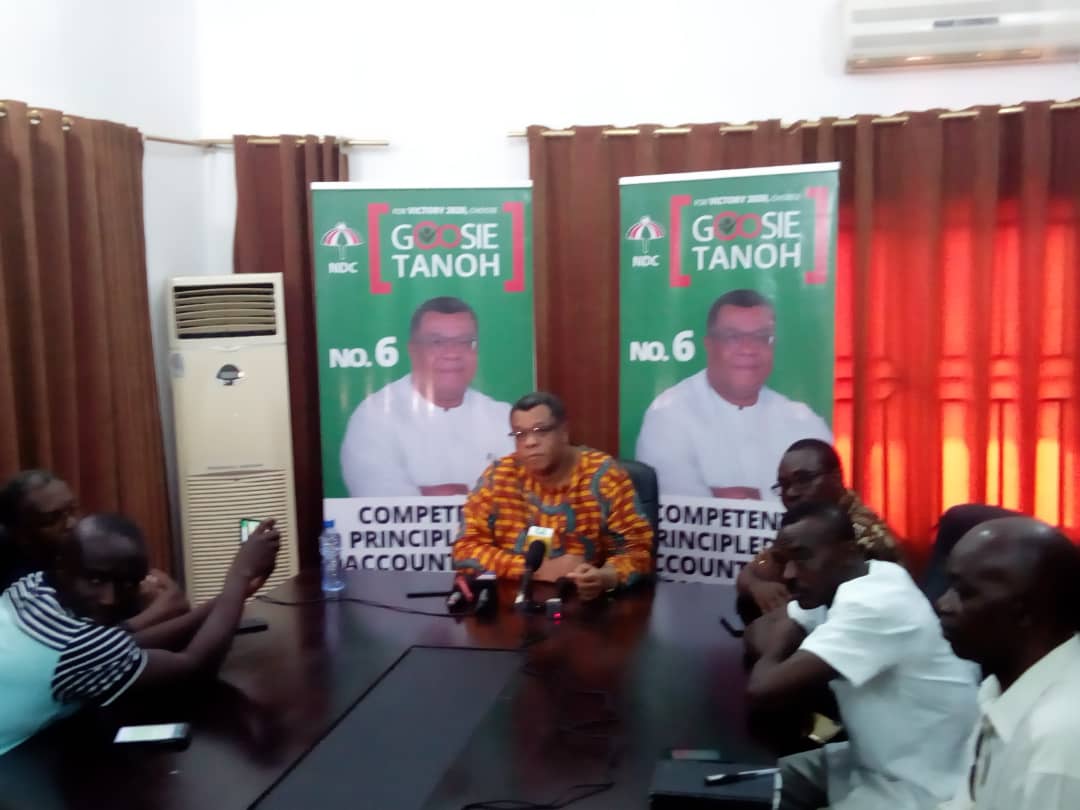 Addressing a news conference in Koforidua, he said,  his tour of the Eastern and other regions has revealed the NDC has fallen short its basic principles in recent times. He was confident of a positive response from his engagement with delegates and town hall meetings Mr. Tanoh pointed out, the economy, jobs, unity, accountability and respect for party structures were high on peoples agenda, hence will pursue those. The flagbearer hopeful also promised a national economic revolution that support entrepreneurs, farmers, market creation, value chain that allow for the integration of the agriculture industry, through which he said he would create jobs “Everywhere we go, the issue of jobs is high in the agenda. So clearly, the current government statement of creating jobs is certainly not born out of the realities we are witnessing on the ground,” he observed.
READ ALSO:  Mahama mourns with ‘rival’ Bagbin
By Yvonne Neequaye|3news.com|Ghana]]>