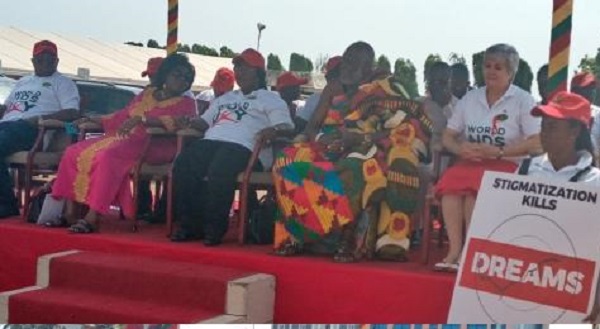 Ms Stephanie Sullivan, the US Ambassador to Ghana has said the US, would remain committed to helping Ghana in the fight against the Human Immunodeficiency Virus (HIV) until the virus is completely controlled in the country.

The US, she said, believed that HIV is not someone else’s problem but a global canker, that required a collective effort to eradicate it.

She gave the assurance at the commemoration of the “2019 World AIDS Day” in Accra on the theme, “Communities Make the Difference – Help End AIDS.”

About 16 years ago, HIV was seen as a ‘death sentence’ but due to effective collaboration of local and international governments and private partners, new ways were developed as HIV response mechanisms, she said.

One of the proven ways, was the introduction of the anti retroviral drugs to keep HIV patients healthy and strong.
Ms Sullivan said US, had invested 85 billion dollars globally to help to control HIV and reduce new infections.

It had also supported Ghana since 1990 with about 85 million dollars to fight HIV among her citizenry, adding that, the US was prepared to back Ghana until it had successfully and wholly eradicate the menace.

She advised health workers who charged fees for HIV treatments in Ghana and across the world for services and medications that are supposed to be free to desist from such acts.

Mr Ishmael Ashitey, the Greater Accra Regional Minister in a speech read on his behalf, said the theme for the commemoration, was appropriate as communities contributed to the AIDS response in diverse ways.

Communities including peer educators, networks of people living with or affected by HIV, such as, people who inject drugs, and sex workers, prisoners, women and young people, counsellors, community health workers, door to door service providers, civil society organisations and grass-root activists have led and continue to lead the campaign to ensure that the HIV response remain pertinent, he said.

He said Ghana has made a notable progress in the national HIV response, and therefore commended the Ghana AIDS Commission, and its partners for the dedicated efforts towards sustainable quality and affordable treatment for the achievement of universal health coverage.

He emphasised that reaching the global 90-90-90 target of eradicating HIV required a strategy that places people at the Centre of the response to HIV.

He, therefore, recommended that community stakeholders be empowered to play essential roles in engaging people who would otherwise be left behind, including young women and adolescent girls and key populations.

In many countries, significant progress had been made in controlling HIV infections, however, gender inequality and denial of human rights were leaving many people behind, she said and condemned those acts.

Mrs Linda Asante-Agyei, the Vice President of the Ghana Journalists Association, urged media institutions not to use their platforms to fuel acts of stigmatisation and discrimination against HIV patients.

READ ALSO:  Gov't to spend GHC60K to reclaim a hectare of 'galamsey' land

She said they rather had a responsibility to protect HIV patients by educating the public on HIV and AIDS to make informed decisions about their health life.

You’re a strong tree; you’ll stand through every storm – Bentil...