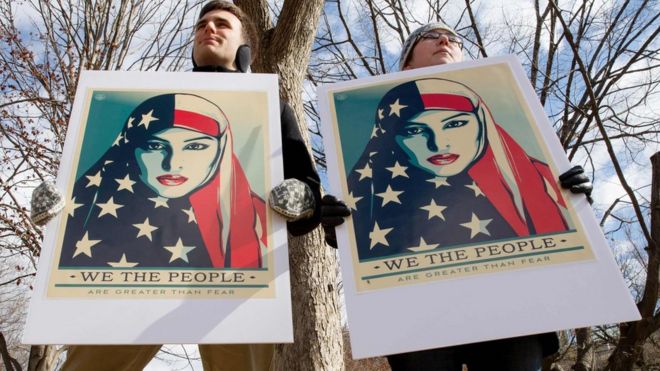 The proposed travel ban has drawn protests across the US[/caption]

A Federal judge in Hawaii has blocked President Donald Trump’s new travel ban, hours before it was due to begin at midnight on Thursday.

US District Judge Derrick Watson cited “questionable evidence” in the government’s argument that the ban was a matter of national security. President Trump described the ruling as “unprecedented judicial overreach”. The order would have placed a 90-day ban on people from six mainly Muslim nations and a 120-day ban on refugees. Mr Trump insists the move is to stop terrorists from entering the US but critics say it is discriminatory. An earlier version of the order, issued in late January, sparked confusion and protests, and was blocked by a judge in Seattle. Speaking at a rally in Nashville, Tennessee on Wednesday evening, Mr Trump said the ruling in Hawaii made the US “look weak”. He said he would take the case “as far as it needs to go” including to the Supreme Court, adding: “We’re going to win.” Hawaii is one of several US states trying to stop the ban. Lawyers had argued that the ban would violate the US constitution by discriminating against people on the grounds of their national origin. The state also said the ban would harm tourism and the ability to recruit foreign students and workers.

Back to the drawing board: Anthony Zurcher, BBC News, Washington

Donald Trump’s first travel ban was suspended because it likely violated the due process rights of individuals with valid residency papers and visas. The battle over whether it imposed an unconstitutional religious test on certain immigrants was put off until another day. That day has arrived. In its decision, the federal court in Hawaii used Mr Trump’s own words – and the words of his advisers – against him. The text of the executive order, Judge Derrick Watson held, could not be separated from the context of the recent presidential campaign, “Muslim ban” rhetoric and all. An order that discriminates against some Muslims, he continued, is just as legally deficient as one that discriminates against them all. Now it’s back to the drawing board for the Trump administration or – perhaps an even gloomier prospect – back to the Ninth Circuit court of appeals, which ruled against the president on the original ban just last month. After Mr Trump’s previous adverse legal ruling, he angrily tweeted “We’ll see you in court.” Although it took a new travel order to get there, it turns out he was right.
READ ALSO:  Uganda manhunt for police who shot dead girl of three
Washington state Attorney General Bob Ferguson, who is attending a court hearing in Seattle in his efforts to block the travel ban, described the ruling as “fantastic news”. “It’s very exciting. At this point it’s a team effort – multiple lawsuits and multiple states,” he said. A court hearing was also taking place in Maryland where lawyers told a Federal judge the travel ban still discriminated against Muslims. After the ruling in Hawaii, the legal battle is now expected to move to the federal appeals circuit. Under the revised order, citizens of six countries on the original 27 January order – Iran, Libya, Syria, Somalia, Sudan and Yemen – would once more be subject to a 90-day travel ban. Iraq was removed from the list because its government boosted visa screening and data sharing, White House officials said. The revised order also lifts an indefinite ban on all Syrian refugees and says Green Card holders (legal permanent residents of the US) from the named countries will not be affected. But more than half a dozen US states have joined lawsuits in an attempt to block it. In his presidential campaign, Mr Trump vowed “a total and complete shutdown” of Muslim immigration to the US, and to implement a process of “extreme vetting” in order to prevent violent extremists from entering the US. Source: BBC]]>