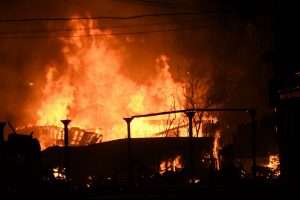 Fire has razed down some shops at the Kumasi Asafo Market, just a day after another fire gutted some parts of the Kumasi Central market.

City authorities have expressed worry about the incidents at the two major markets in the metropolis.

They have appealed to traders to ensure no naked fire is left behind at the close of their trading activities.

3news’ Beatrice Spio-Garbrah reports that the fire at the Asafo market started around 9pm Saturday when most of the traders had closed.

It started from the shops at the main entrance of the market where most of the traders deal in local sandals and rubber products.

The cause of the fire outbreak is not immediately known but some of the affected traders are pointing to power fluctuation.

Personnel from the Fire Service were able to secure other property in the enclave as they fought the blaze.

Osei Assibey Antwi advised traders to thoroughly inspect their shops by putting out every naked fire and switching off all electrical appliances before leaving the shops.

Fire officers have also been commended for their prompt response in fighting the fires at Central market on Friday and at Asafo market on Saturday.

Not every Gospel artiste is a Christian – Rose Adjei

Life under lockdown for parents of children with special need

Covid-19: 11 Togolese in isolation in Kumasi

Do your children know their vagina or penis by its name?

Do your children know their vagina or penis by its name?