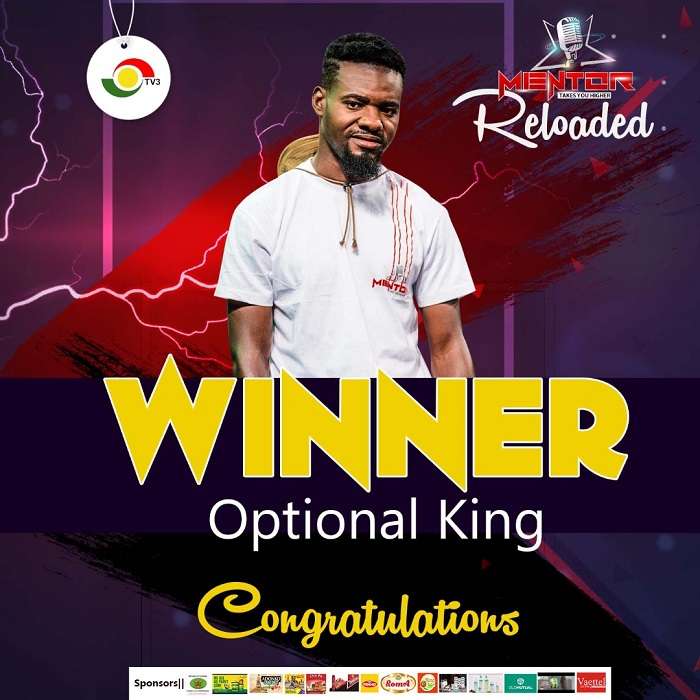 The versatile performer beat competition from Chichiz and Myka to emerge the winner of the enviable two-bedroom house.

Born Mohammed Lukman, a very emotional Optional King, who represented Tamale in the competition, could simply not hold back his tears when he was announced the winner of the reality show beating the highly tipped Chichiz.

The very talented Optional King stood tall amongst thousands of hopefuls who turned up for auditions when the search for the next big star in Ghanaian music kicked off last year.

The thousands were pruned down to 58 and then to 34 after which16 contestants were selected for the live shows.

On Sunday night – February 23 at the Accra International Conference Centre (AICC), six contestants namely Yaw Black, Jedy, Optional King, Myka, Chichiz and Evance – after 13 weeks of intense competition, were eyeing to walk home with not only the bragging rights as winner of the best music reality show in Ghana but also a luxurious two-bedroom house up for grabs.

This was the first time, in the history of music reality shows in Ghana, that the winner was going receive a two-bedroom house in a gated community in Accra.

The finale kicked off with a soothing ‘Mentor – Takes you higher’ themed song performance from ‘Soul Street’.

Bessa Simons, a judge on the reality show, with his keyboard, took to the stage with an exciting performance of some of his classic songs including ‘Belempe’ and ‘Awowye’. The veteran musician was joined by Yaw Blvck to perform ‘Belempe’.

Edem, Myka and Jedy, like a tsunami, invaded the stage to give off an electrifying performance of ‘Toto’. The three set the roof on fire. It was a party at the Accra International Conference Centre!

Adina was next. Looking bubbly as usual, the singer and Evance did justice to her latest hit song, ‘Take Care of You’. The excitement level hit a crescendo when Optional King joined them on stage with a classic freestyle

The three then joined forces to perform ‘Killing Me Softly’. They were simply a delight to watch!

Appietus and Chichiz took their turn on stage. And yes they stole the show with an energy-filled performance of 5Five’s ‘Muje Baya’ which was produced by Appietus. This was in fact, one of the rarest moments the world got to see Appietus perform his iconic verse on the song on stage.

After encouraging words from the four judges, the show got on the road proper.

Yaw Blvck and Jeddy took the stage with a joint performance of Stonebwoy’s ‘Run Go’.

After that performance, Edem said “…apart from a very minute glitch that I heard, I think you guys had a brilliant performance,” while Adina commented that, “I enjoyed the performance.”

“I think this is a very good start for the programme…the energy was good,” Bessa Simons noted.

Myka and Chichiz were next. They performed Lukas Graham’s ‘7 Years’ with Chichiz’s iconic local rap spicing it up.

Evance and Optional King performed Sarkodie and Castro’s ‘Adonai’ with their unique twist. All the judges commended them for their outfit and performance.

During the second round, the contestants performed some of their best songs during the competition.

Evance did ‘Maye Se Mo Pen’ by OJ. Appietus noted that “he did very well. He was articulate…it was nice.”

Bessa Simons reacting to the performance said, “You sung this song papa from head to toe…”

Edem acknowledged that he has grown and he is doing very well.

“We have an amazing talent,” while Adina simply said, “I’ve really proud of you…”

After that amazing tribute, Edem said, “you are a super talented rapper…you are a good storyteller.”

Bessa Simons, on his part, urged him to record the song to educate people on the dangers on Ghanaian roads and create awareness about road safety.

Appietus hinted that he was ready to produce the song.

Adina, in her reaction, gave him thumbs-up for the performance.

Right after that performance, a fan of Chichiz, Nana Kwame, surprised him with a portrait drawing of him.

Yaw Blvck performed his rendition of Bobby McFerrin’s ‘Don’t Worry Be Happy’ which received great reviews from the judges.

Bessa Simons said, “I am very happy…” and the Ghanaian diction made it really exciting.

Adina commended him for his creativity while Edem said, “now you are really in control of your art…”

Appietus simply reacted that, “Yaw Blvck you do all.”

When it got to Myka’s turn, he performed Gloria Gaynor ‘I Will Survive’. He received a standing ovation from the judges.

Adina said she “enjoyed that thoroughly…the energy…congratulations…” Edem, on the other hand, described it as “the best performance of the night”

After making a mark when he performed Fela’s ‘Zombie’ some weeks ago, Optional King gave it a second try on the finale night and yes he once again delivered beyond expectation.

The performance was so good that, he received a standing ovation from the judges.

For the first time, Adina had no words but rather a celebratory chant for Optional King.

Edem urged Ghanaians to vote for contestants who have put in the work to be on the finale stage.

“Your performance is mad,” he added.

Bessa Simons, overwhelmed by the impressive performance, noted that, “Fela is as passionate as you [Optional King] are…you nailed it…it sounded even better than the recording.”

Appietus confessed that it was the “best performance of the night!”

When it got to Jedy’s turn, he did Culture’s ‘No Night’.

“Your performance was through the roof,” Appietus said after that mind-blowing performance.

Bessa Simons noted, “you put in everything and I love the way you got the crowd behind you…” while Adina added that, “I am so proud of you…this was a phenomenal performance”

Edem, after witnessing Jedy’s performance confessed that “my best performances tonight are Myka, Optional King and you (Jedy).”

After performances from Andy from Mentor One, Bosom P-Yung, and Frema Baby (who was part of the Mentor Reloaded reality show), all six contestants were invited on stage by the hosts – Nana Kwadwo Addo and MzGee.

Yaw Blvck, Myka, Optional King, Chichiz moved on to the final round. Sadly it was the end of the road for Evance and Jedy.

For the final round, the contestants performed their own compositions. Myka performed, ‘Obi Ni Ho’, Yaw Blvck did ‘Mind Your Business’, Chichiz sang ‘Shiishii Kwa’ while Optional King performed ‘Victory’.

After a performance by Fameye, it was time to announce the winner of the Mentor Reloaded music reality show.

After nerve-racking moments, Yaw Blvck was announced as the third runner-up. He received GH₵5,000, one mastered song and GH₵20,000 airtime on all Media General platforms.

Myka took the third position. For his prize, he received GH₵5,000, return ticket to Cairo, Egypt, one mastered song and GH₵30,000 airtime on all Media General platforms.

Chichiz, who had been the favourite of many, emerged first runner-up. He received GH₵6,000, return ticket to Cairo, Egypt, one mastered song and GH₵40,000 airtime on all Media General platforms.

Some of Ghana’s most sought after musicians will mount the stage on Sunday night to entertain the hundreds who will...

For the first time in the history of music reality shows, the winner of TV3 Mentor Reloaded will receive a...