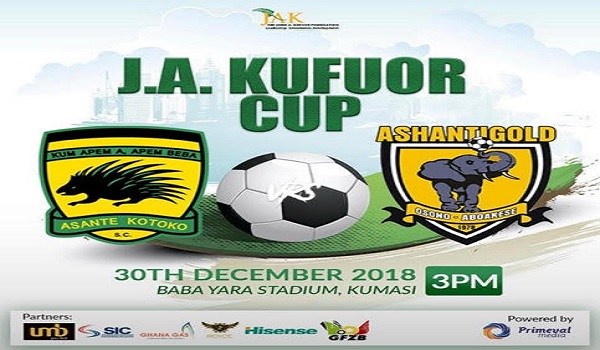 Kumasi Asante Kotoko and Ashgold Sporting Club played in a one all draw game, in the maiden John Agyekum Kuffuor (JAK) Cup match at the Baba Yara Stadium, Kumasi, on Sunday, January 6. The game, which was initially a one-off match, to honour the former president of Ghana on his 80th Birthday Anniversary Celebration, would be replayed at a later date to determine the winner. The game, had been closely contested in an action packed first half, that brought no goal to either side. Kotoko, had started the first half very well with some beautiful exchanges, which resulted in two clear-cut chances, missed by Abdul Fatawu and Songne Yacouba. Ashgold, then came back in the game after the 30th minute mark, threatening Kotoko’s defence, with swift counter breaks, as striker Richard Ella Djodi came as close as, hitting the cross bar in one of the breaks. Asante Kotoko, however opened the scoring after the recess with a beautiful carpet strike from Emmanuel Gyamfi in the 58 minute. Ashgold goalie Frank Boateng, was grounded helplessly as he watched Gyamfi’s effort cross his goal line. Shafiu Mumuni got a chance to equalise in two minutes after Kotoko’s goal but his short was tipped away by Muntari Tahoe in post for Kotoko. In the resulting corner kick, Djodi was denied a goal for the second time after his headed surfaced on the cross bar. There was little action after that, as Kotoko tried to while away time by playing to the gallery. The Fabulous lads defender, Wahab Adams, was also denied a second scoring chance after his goal bound header from Maxwell Baako’s corner, was cleared on the line by Samed Ibrahim in the 63rd minute. Kotoko grew in confidence as they followed on with a series of of attacks which forced goalie Frank Boateng into making some decent saves. It was to be for Ashgold in the 70th minute when their most dangerous leg on the day equalised with a spectacular long range strike. The match went into extra time with very little action but for an Ashgold penalty denied in the 110 minute after Djodi was fouled in the penalty area. In a surprise decision after extra time, organisers said there could not be penalty shootouts to determine a champion as the match had been rescheduled to a later date. GNA]]>