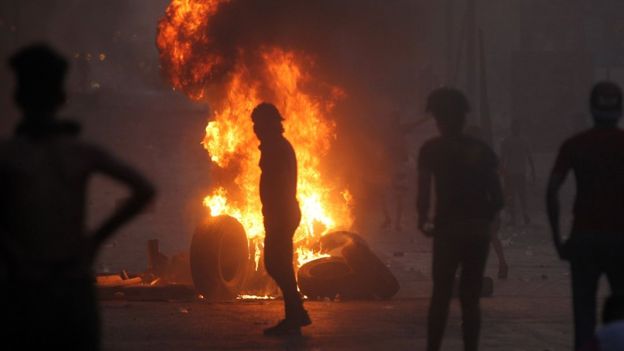 The United Nations has called for an end to the “senseless loss of life” in Iraq as the death toll from anti-government protests nears 100.

Demonstrators say they are taking a stand against unemployment, poor public services and corruption in the country.

Jeanine Hennis-Plasschaert, head of the UN Assistance Mission for Iraq, said: “Five days of deaths and injuries: this must stop.”

Those responsible for the loss of life should be brought to justice. she said.

On Saturday, security forces broke up a mass rally in the east of Baghdad.

Five people are said to have died in the latest clashes in the capital. Security forces are again reported to have used live rounds and tear gas.

At least 99 people have died and nearly 4,000 have been wounded since protests began in the capital on Tuesday before spreading to the south of Iraq, the Iraqi parliament’s human rights commission says.

It is the deadliest unrest since the so-called Islamic State (IS) group was declared defeated in Iraq in 2017.

It is seen as the first major challenge to Prime Minister Adel Abdel Mahdi’s fragile government, nearly a year since he came to power.

The authorities have been trying to control the protests through curfews and a near-total internet blackout.

The daytime curfew in Baghdad was lifted on Saturday, and smaller groups of protesters began to renew their action.

The city’s Tahrir Square has been the focal point of protests, but it was blocked on Saturday, according to local news agencies.

An emergency session of parliament failed to go ahead on Saturday afternoon.

Several television stations were attacked, including the offices of the Saudi-owned Al-Arabiya news channel.

In Nasiriyah, demonstrators set fire to the headquarters of six different political parties.

According to AFP news agency, thousands also descended on the governorate in the southern city of Diwaniyah.

The demonstrators do not appear to have any clear leadership at the moment, and their anger is increasingly radicalising their demands, says the BBC’s Sebastian Usher. 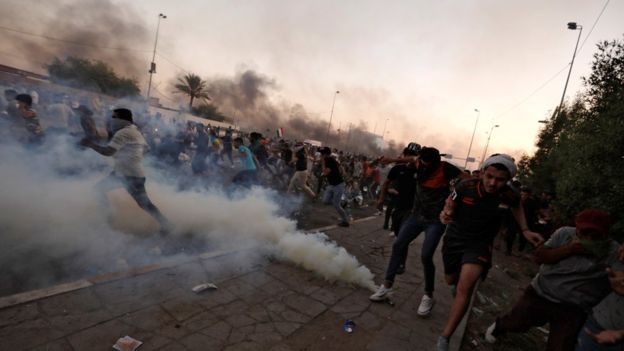 What’s been the reaction?

On Friday, Prime Minister Mahdi vowed to respond to protesters’ concerns but warned there was no “magic solution” to Iraq’s problems.

He said he had given his full backing to security forces, insisting they were abiding by “international standards” in dealing with protesters.

Iraq’s most senior Shia Muslim cleric, Ayatollah Ali al-Sistani, urged the government to respond to the demands for reform, saying it had “not answered the demands of the people to fight corruption or achieved anything on the ground”.

The UN and US have expressed concern over the violence, and urged the Iraqi authorities to exercise restraint.

Why is this happening now?

Corruption, unemployment and poor public services are at the heart of the discontent faced by young Iraqis today. The unrest began spontaneously with no formal leadership in mostly Shia areas in the south, and quickly spread.

Iraq has the world’s fourth-largest reserves of oil, but 22.5% of its population of 40 million were living on less than $1.90 (£1.53) a day in 2014, according to the World Bank. One in six households has experienced some form of food insecurity.

The unemployment rate was 7.9% last year, but among young people it was double that. And almost 17% of the economically active population is underemployed. 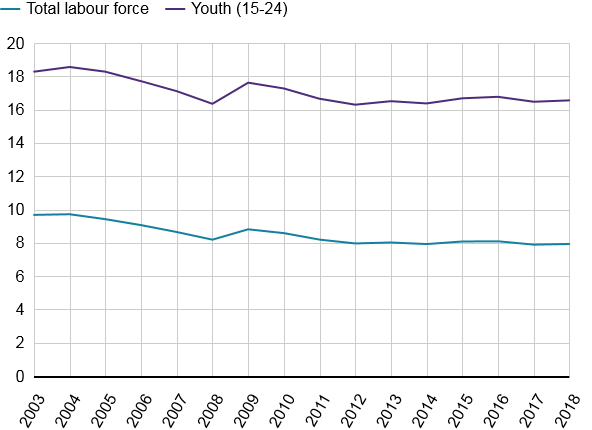 The country is also struggling to recover after a brutal war against IS, the Sunni Muslim group which seized control of large swathes of the north and west in 2014.