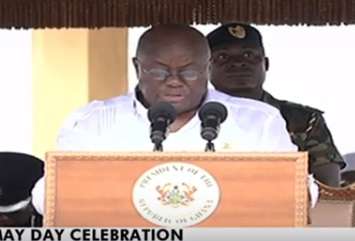 President Nana Addo Dankwa Akufo-Addo says plans are far advanced towards the establishment of a Pension Scheme for cocoa farmers across the country.

Government had proposed the scheme in the 2018 budget and 3news.com is reliably informed that it is currently at the draft state.

Speaking at a ceremony to mark this year’s May Day at the Black Star Square in Accra, President Akufo-Add said about 90% of workers in the country operate within the informal sector, hence there is the need to put measures in place to attend to their pension needs.

This year’s May Day celebration is under the theme, “Sustainable Pension for all: The Role of Social Partners.”

The president noted that it is important to ensure that farmers and other informal sector workers as well as workers in general do not struggle to afford basic needs when they retire.

For this reason, he noted, government is doing all within its power to ensure that there are proper systems to manage Pension Schemes for all workers in the country without hitches.

“At the moment, government efforts are on course to establish a cocoa farmers pension scheme. This trend will be extended to other workers, worker groups in the informal economy.”

President Akufo-Addo further assured Ghanaians that government is focused on ensuring that an enabling environment is created for all workers in the country.

He said government’s economic transformation agenda is on course and will help reduce unemployment in the country and improve pension.

GRA to go after tax offenders after Prosecution Policy launch

GRA to go after tax offenders after Prosecution Policy launch