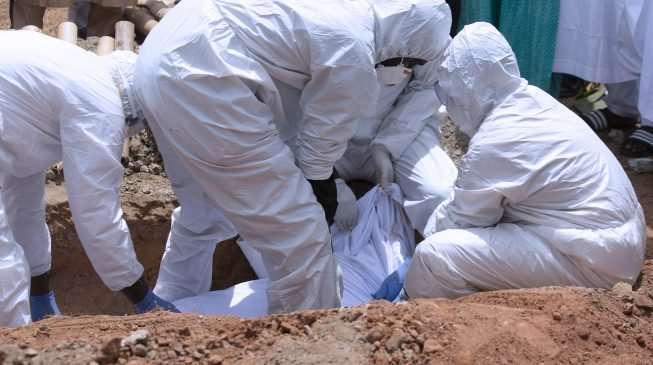 According to the pressure group, “the reported 54 deaths so far cannot be right”, indicate that the Ashanti Region, which has the second highest coronavirus cases, has recorded 38 deaths yet only less than 20 of those deaths have been included in the national figure.

In a statement Monday, the group indicated there is s a complete lack of candour from government officials on the rate of infection.

“There is cause to suspect that the death numbers are being massaged,” the group claimed but did not provide alternate figures to counter the official numbers from the Ghana Covid-19 management team.

It warned that once the public begin to suspect underreporting in figures, there will be trust issues and that will have serious consequences on public behavioural responses.

Although OccupyGhana acknowledge the initial successes chalked by the government in containing the spread the deadly coronavirus within Ghana, “we should not be lulled into a false sense of security”

Read the full statement below

DEAR GHANA, HAVE WE DECIDED TO LIVE WITH THE VIRUS?

The outbreak of COVID-19 surprised many leaders around the world. Several had to institute lockdowns in major parts of their countries to stem the spread of the virus. However, this led to massive economic downturns in their countries. To deal with this reality, several leaders have opened their countries up again and are countenancing an express or implied policy of ‘Living with the Virus.’

THE HEALTH REALITY IN GHANA

We acknowledge the initial successes that the government has had with containing the spread of COVID-19 within Ghana, which has even attracted the favourable attention of some international commentators. However, we should not be lulled into a false sense of security.

Ambulances are not showing up when people call 112. Tests are delayed on account of suspected depletion in reagents, short staffing etc. There’s a complete lack of candour from officialdom on infections. A good case in point is the real possibility that there is an outbreak of COVID-19 among parliamentarians and yet that fact is being hidden and all we get are conflicting statements and behaviour that is not in line with how to deal with this disease.

The case count is growing steadily by the day – about 200 to 300 new cases per day. At the last count, we had 7652 confirmed active cases even though that number could be higher (the total number of confirmed cases is 11,964.)

There is cause to suspect that the death numbers are being massaged. The reported 54 deaths so far cannot be right. For instance, even though 38 deaths have been reported from the Ashanti Region alone, less than 20 of those deaths are included in the national count!

If the public suspects under reporting etc, there will be a loss of trust in the reporting system and that will have consequences that will influence public behavioural responses.

Several healthcare workers have been infected and some have died, sadly. This points to the sad fact that our doctors and nurses and frontline health workers do not have adequate PPE. Our holding and treatment facilities are running out of space and just a few days ago, the Special Advisor on Health at the Presidency lamented the fact that we do not have enough critical care staff. We also do not have enough critical care beds.

Hospitals are getting overwhelmed with spill overs of designated areas for suspected and confirmed cases into emergency rooms and wards otherwise not assigned. The result of this, with delays in getting test results, is a desperate attempt to shorten hospital stay and increase availability of bed space by discharging patients before the post-treatment test results. The unfortunate occurrence, which has led to some being discharged with their repeat tests coming back positive after their discharge. This is disheartening and should not be allowed as we seek to fight this pandemic with professionalism and integrity.

Contact tracing is not being done at the levels needed anymore. The government must answer allegations that because contact tracers were paid GHS70 instead of the promised GHS150 per day, they have walked out. The result is that there isn’t much contact tracing going on at the moment.

And yet we, Ghanaians, are not doing the things that have been shown to reduce the spread of the disease – no physical or social distancing and an unwillingness to wear face masks. Even elected and other high-ranking government officials are guilty of this. The country’s success in suppressing the spread of this disease was due in part to the early and aggressive lockdown strategy, minimising the opportunity for transmission of the disease in strategic areas. If the lockdown is not economically feasible, should we not be pursuing other measures that reduce transmission and do not affect the economy as much?

Following that line of thought, is it a wise decision to reopen schools even if it is just for Forms 2 and 3 SHS, Form 3 JHS and final-year students in our tertiary institutions?

We acknowledge that to ensure social distancing, the President directed that JHS 3 classes are to comprise of a maximum of 30 students and SHS classes a maximum of 25 students. Prior to the students arriving, the schools are supposed to be fumigated and disinfected. Once the students arrive, each student, teacher and non-teaching staff are to be provided with re-usable face masks by the Ministry of Education.

Looking at the behaviour of the general Ghanaian population, how sure are we that the JHS and SHS students are going to wear their masks and social-distance not only in the classrooms but also when they leave the classrooms and in the dormitories? How good is personal hygiene going to be at a time when it is of utmost importance? For instance, are all schools going to be assured of the running water needed for the basic hand-washing protocol?

If we are not careful, these schools could turn into hotspots for disease transmission and the students could become super-spreaders.

Of course, students have been impacted by lockdown. Their learning has been affected, even where there are robust online and at-home lessons underway. But at this point in the school year, is it really worth the risk of reopening schools? If the whole aim is for them to finish their exams, can we put resources into getting students to take these exams online? How about students being given time-bound extended essays and/or open book examinations to write at home? How about combining all of those with continuous assessment grades to arrive at a final exam score for all such students?

We are asking these questions because we do not think that the need to get the students to be physically present for exams is worth the risk of having the disease break out in our schools. We are not convinced that if students get sick in schools, there are adequate resources to test and treat them.

If the government has decided to pursue a policy of ‘living with the virus,’ then the healthcare system and the population should be prepped for this. Let’s just remember that Sweden tried the method and has one the highest levels of deaths per million in the world.

We acknowledge the renewed emphasis on enforcing social distancing and the wearing of masks. This should be across the board and must include all government officials. They have to lead by example.

Large social gatherings should be continued to be banned.

We should re-dedicate resources into testing and contact tracing.

Recent studies have shown that not all patients who get severely ill need ventilators. We should invest in cheaper non-invasive oxygen therapy solutions.

Also, the use of convalescent plasma has been shown to reduce mortality. The Ministry of Health should start an aggressive push to harvest and store plasma from recovered patients.

At the start of this outbreak, Ghana showed the world that we could do a lot with the little we had. This took resolve and great leadership. We should not lose that now when the stakes may be much higher.

For God and Country

There are still outstanding threats from secessionists – Oppong Nkrumah

Peace is our priority for elections 2020 – EC

There are still outstanding threats from secessionists – Oppong Nkrumah

Peace is our priority for elections 2020 – EC