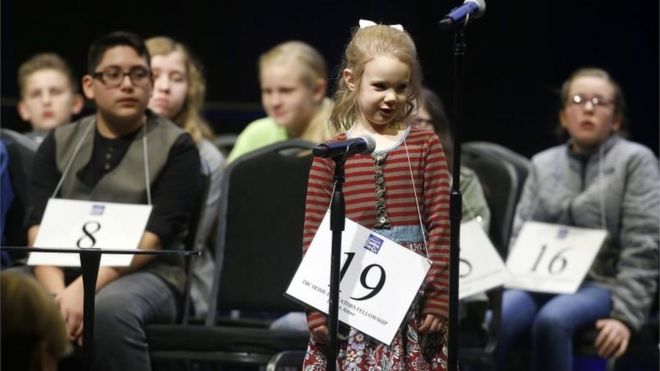 A five-year-old Oklahoma girl has made history by becoming the youngest person ever to qualify for the Scripps National Spelling Bee.

Edith Fuller correctly spelled “jnana” to beat more than 50 contestants in the Scripps Green Country Regional Spelling Bee in Tulsa. She also cracked the words Panglossian, Baedeker, nisei and Croesus. The young spelling master will head to Washington in May to compete with other children across the country. The National Spelling Bee is open to contestants who have not finished the eighth grade. There is no minimum age to compete. “I feel thankful,” she said after winning the regional competition. Edith, who is home-schooled, faced off against competitors from primary and middle schools throughout northeast Oklahoma. “It’s fun to share her with everyone,” said Annie Fuller, her mother. “I knew she’d be a novelty, so I’m proud she held her own.” Annie Fuller told the Tulsa World the family realised their daughter’s potential last summer while quizzing her spelling skills. Edith correctly spelled “restaurant” without having been taught the word.

Can you spell better than a five-year-old?

Here are the words Edith aced on her way to glory: Jnana is a Sanskrit word for “knowledge” in Indian philosophy and religion. Panglossian is characterised by excessive optimism, regardless of circumstances. Baedeker is a guidebook, originating from the series of travel guidebooks by German publisher Kark Baederker. Nisei is an American or Canadian whose parents were immigrants from Japan. Croesus is a very wealthy person. Croesus was the last king of Lydia (c560 – 546 BC) famed for his wealth.
READ ALSO:  Bukom Banku to fight Bastie in September
Sarsaparilla is a tropical American climbing plant, or a sweet drink flavoured with the root of this plant. She began practising with her mother and when she would misspell a word, she would look it up and learn about the word and its origins. “We knew there was something special there,” Annie Fuller said. “Learning the words was so educational,” added Edith’s mother. “She was able to learn about different countries and cultures and different kinds of food.” Akash Vukoti, six, was last year’s youngest contestant at the National Spelling Bee. He was eliminated after misspelling the word “bacteriolytic” in the early rounds of the contest. Akash made national headlines and was interviewed on ABC’s Jimmy Kimmel Live and NBC’s Steve Harvey’s Little Big Shots. He lost at his regional bee in Texas last week and will not head to Washington this year. Source: BBC]]>