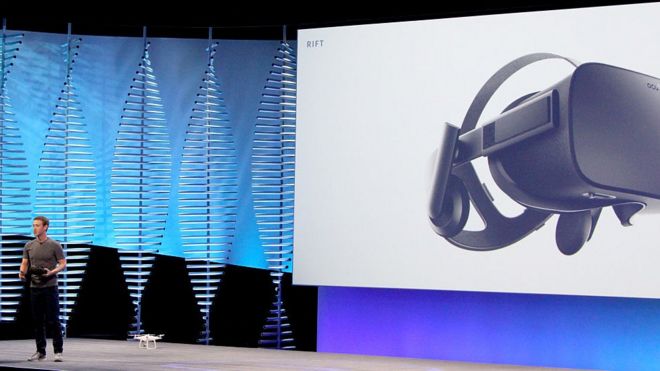 A US court has ordered Facebook and other defendants to pay $500m (£395m) after finding they unlawfully used a firm’s virtual reality technology.

The jury found Oculus, which Facebook bought in 2014, used computer code belonging to video game developer Zenimax to launch its own VR headset. Oculus said it was “disappointed” and would appeal against the ruling. The case threatened to overshadow Facebook’s latest results, which showed it enjoyed a strong end to the year. Facebook’s net profit more than doubled to $3.6bn in the fourth quarter. The social network was helped by 53% growth in advertising revenues, and said it was on course to hit two billion users in the first half of 2017.

Shortly before the results came out, the court awarded Zenimax damages from Facebook, Oculus and Oculus executives following a three-week trial. Zenimax argued that its early innovations in virtual reality were unlawfully copied when Oculus built its own headset, the Rift. “We are pleased that the jury in our case in the US District Court in Dallas has awarded Zenimax $500m for defendants’ unlawful infringement of our copyrights and trademarks,” said Zenimax chief executive Robert Altman. The co-founder of Oculus, Palmer Luckey, was also found to have broken a non-disclosure agreement with the firm. However, the jury ruled that none of the defendants misappropriated Zenimax’s trade secrets.

Few people will have given Mark Zuckerberg as many headaches as Palmer Luckey. The 24-year-old founded Oculus VR, and when Facebook stepped in to buy the firm for $2bn, he was rewarded very handsomely indeed. Then it went a bit downhill. First, it was revealed he was using some of that money to fund a pro-Donald Trump trolling campaign, which led to Facebook removing him from public view. He didn’t even turn up to his own company’s developer’s conference last year. And now, a jury has ruled that he broke a non-disclosure agreement that’ll mean $500m in damages (unless Facebook wins on appeal). Mark Zuckerberg doesn’t display many emotions – but you wonder what he’ll be like behind closed doors on this one. As it stands, Palmer Luckey is still a Facebook employee, but what he’s doing there is anyone’s guess – the company won’t even tell me his job title.
READ ALSO:  Ebola 'super-spreaders' cause most cases
An Oculus spokesperson said: “The heart of this case was about whether Oculus stole Zenimax’s trade secrets, and the jury found decisively in our favour.” The firm did not comment on the $500m damages. Facebook chief executive Mark Zuckerberg testified last month that “the idea that Oculus products are based on someone else’s technology is just wrong”. Zenimax, which owns id Software, a video games developer, was suing Facebook for $2bn. Along with the claims against Palmer Luckey, it alleged that John Carmack, co-founder of id, took intellectual property belonging to Zenimax when he left the firm to join Oculus as its full-time chief technology officer.

Virtual reality is only a small part of Facebook’s current business, but is seen as important to the firm’s strategy over the next 10 years. Most of Facebook’s fourth-quarter revenue – which jumped 54% to $27.6bn – came from adverts on its social network. “Facebook had another stellar quarter, delivering record revenue, user growth and profitability, as it rides the shift of advertising to online,” said Martin Garner, a senior analyst at CCS Insight. “However it expects advertising growth to slow in 2017, so it expects to be less profitable this year.”

Other challenges that Facebook face this year include a changing approach to privacy in Europe, an uncertain business landscape in the US and challenges in China, Mr Garner said. The social network has also been widely criticised after some users complained that fake news on its platform had influenced the US presidential election. In a call with analysts on Wednesday, Facebook executives signalled it would tackle the problem through the use of more artificial intelligence. They also said many of Facebook’s new users were in India, where telecoms operators had offered free data packages for Facebook traffic. For the full year, Facebook grew its net profit by 177% to $10.2bn. Source: BBC]]>
READ ALSO:  We took the right decision, Mahama is our best bet for 2020 - B/A NDC chair

I have committed no crime – Ofori-Atta on censure motion

Kofi Akpaloo promises to invest $1bn in Ghana football if he...