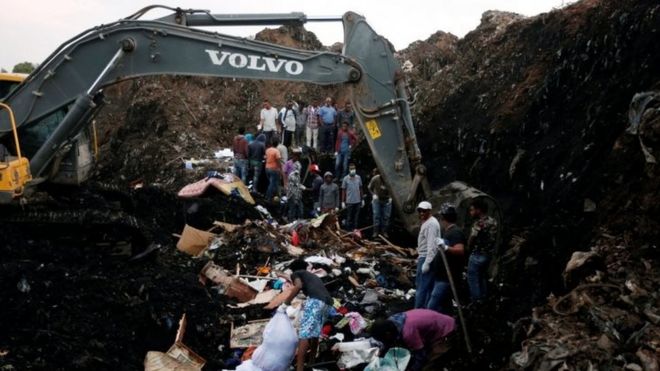 The death toll from Saturday’s landslide at a vast dump in Ethiopia’s capital, Addis Ababa, has now risen to 113 people, local officials say.

A search operation at the Koshe landfill will continue overnight. As many as 150 people are believed to have been at the site during the landslide. Meanwhile, the funerals of some of the victims have taken place. The dump, which has served the city of four million for more than five decades, provided shelter for some. The country is currently observing three days of mourning for those who died. Hundreds of people attempt to make a living by scavenging at the landfill site, sifting through the rubbish for items they can sell. Some resided at the rubbish dump permanently. More than 350 residents have now been moved from the site, the officials say. A number of makeshift houses were buried under tonnes of waste in the landslide. Rescue teams are now using excavators to dig through piles of rubbish. The authorities have been building Africa’s first waste-to-energy plant near the landfill. They plan to burn rubbish generated by Addis Ababa and convert it into electricity. Source: BBC]]>
READ ALSO:  Mortuary sued for 'refusing gay funeral'