Company fined over $1m for engaging in illegal fishing 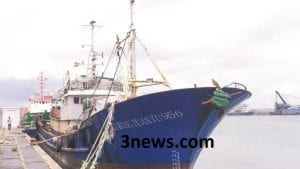 The Fisheries Commission has fined Gyinam Fisheries Limited, owners of the Lu Rong Yuan industrial trawler, one million dollars for engaging in Illegal, Unreported and Unregulated (IUU) fishing in the Western Region.

An additional fine of GHC 124,000 was imposed on the company for being cost of fish found on board the vessel.

“The team suspected the vessel to be engaging in illegal fishing. The vessel was arrested and escorted to the Western Naval Base in Sekondi on the same day and detained”.

A joint team made up of the Fisheries Enforcement Unit, Ghana Navy, Marine Police and Ghana Maritime Authority carried out inspections on the vessel and discovered that they are engaged in non-logging, also known as non-reporting of catch.

The team also found 405 cartons and 864 slabs of frozen mixed small pelagic fish species below the minimum landing size and undersized mesh with mesh sizes less than the approved 60mm.

Subsequently, the Marine Police brought charges against the Captain, Chief Engineer and Second Officer, all Chinese nationals, and two Ghanaian crew members at the Takoradi Circuit Court. They were found guilty of engaging in illegal, unreported and unregulated fishing.

While the trial was ongoing, counsel for the accused and owners of the vessel sought for an out of court settlement.

A fine was thus imposed on them as a result of the hearing by the Fisheries Out of Court Settlement Committee in Takoradi.

Western Region Director of Fisheries, Godfrey Baidoo-Tsibu said the accused persons have 30 days within which to comply.

“According to Section 116 of Act 625, the owners have up to 30 days to effect full payment of all the fines or the case will revert to court. The vessel also remains under detention until full payment of the penalty”.

Director Marine, Railways and Ports ACP Siedu Iddi warned owners of industrial trawlers to ensure their vessels operate within the remit of the law.

“… we have come together to fight the illegal, unreported and unregulated fishing practices. So, we will deal with any person caught in accordance with the law without fear, favor or interference. So please you should do your fishing practices knowing very well that when you err, we shall apply the law to it fullest”.

The vessel which has since been impounded is at the Western Naval Command in Sekondi in the Western Region.