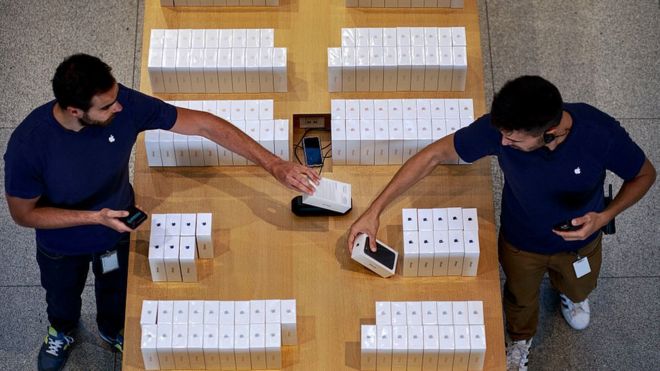 Apple reported its highest ever quarterly revenue, as the iPhone 7 helped it return to a growth in sales in the final three months of 2016.

In its first full quarter since the iPhone 7’s release, Apple reported net sales of $78.4bn (£62.3bn), up 3% on the same period a year ago. Chief executive Tim Cook said Apple had sold “more iPhones than ever before”. It had also set new records for revenues from its Mac, Apple Watch and services divisions, he said. Apple shares rose 3% in after-hours trading following the results.

“We’re thrilled to report that our holiday quarter results generated Apple’s highest quarterly revenue ever, and broke multiple records along the way,” Mr Cook said. Apple had suffered three quarters in a row of falling revenue as mounting competition, particularly from Chinese rivals, hit sales of its flagship iPhone. In April, the firm reported its first fall in quarterly revenue since 2003, hurt by slowing business in China. A continued slowdown in iPhone sales – which account for two thirds of income – led to Apple reporting a drop in annual revenue in October, the first such fall in 15 years.

A momentary sigh of relief for Tim Cook as the iPhone performs very well indeed over the holidays. But it’s worth looking to the future a little, because that’s what investors do in these situations. In its forecasts, Apple said it anticipated people holding off from upgrading until the new iPhone is revealed, meaning a slump in growth, or maybe a return to decline, over the next few months. While people waiting for the new phone is nothing out of the ordinary, you get the sense Apple fans, both casual and dedicated, are gearing up for something extraordinary. And that’s because this will be the 10th anniversary iPhone – and some are hoping for a major new innovation, rather than the slightly more incremental improvements made in the past couple of years. As ever, Apple is a victim of its own success. Pressure weighs heavy ahead of the launch which will likely be in September.
READ ALSO:  Talensi: Residents want popular Chinese mine shut down
Mr Cook said demand was particularly high for the larger iPhone 7 Plus during the quarter. The iPhone 7 models – which were released in September and included an improved camera but ditched the traditional headphone socket – now account for about 17% of Apple’s phone sales, according to research firm Localytics. Apple said it had sold 78.3m iPhones in the three months to 31 December, up from 74.8m a year before. It reported revenue of $54.3bn from iPhone sales, along with $7.2bn from the Mac, $5.5bn from the iPad and $4.0bn from other products, including the Apple Watch.

Revenues from its services division – including the App Store, Apple Music and iCloud – were $7.1bn. The segment is now close to overtaking the Mac as Apple’s second biggest source of revenue. “Services obviously continues to be a real success story for them,” said Jackdaw Research analyst Jan Dawson. “It’s one of the fastest-growing segments they have, driven largely by the App Store.” Analysts expect growth in services to help offset declining hardware sales as the smartphone market matures. Apple executives warned that some customers were holding back on phone upgrades in anticipation of the 10th anniversary iPhone later this year. Source:BBC]]>