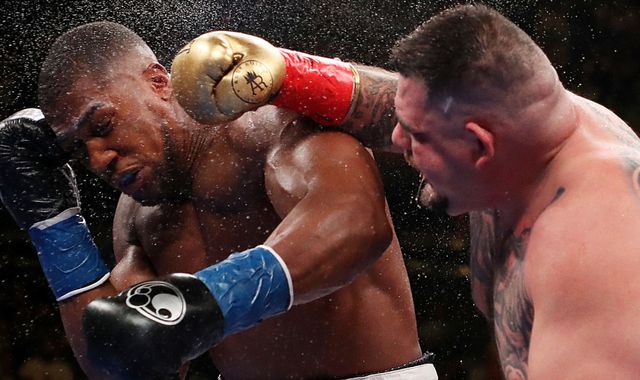 Joshua, 29, gave up his IBF, WBA and WBO titles in a seventh-round stoppage loss to Ruiz in New York on 1 June.

Speaking before Saturday’s bout with Tom Schwarz – which will be broadcast by BBC Radio 5 Live – Fury said Joshua did not want to be in the ring.

Tyson Fury to fight unnamed opponent in London in December

“When a man doesn’t want to be there once, he will always do it and it’s hard to come back from,” said Fury.

“It’s been done many different times by many different fighters. He did it that night and I don’t think he will come back from it. Finished. Ask any top trainer who has been around the sport a lifetime. When he got to the ring I saw he didn’t want to be there.”

Fury’s Las Vegas contest with Schwarz will air on 5 Live in the early hours of Sunday morning in the UK.

The bout comes two weeks after Ruiz ripped up the heavyweight division’s plot lines by inflicting a first career defeat on Joshua, who had previously made Fury an offer to fight.

“Everybody thought that man could beat me,” Fury added. “In what world could he ever beat me? What were people seeing? I don’t know what people were looking at as I don’t know in what world he could have beaten me.”

Fury this week said he respects Joshua and regards him as “a winner in life” for how he has achieved sporting success after brushes with the law in his youth.

But Joshua’s loss has halted talk of any immediate fight with Fury or WBC champion Deontay Wilder as the 2012 Olympic champion is now intent on fulfilling a rematch with Ruiz.

Fury, who battled mental health and drug issues before returning to the sport after a 31-month spell of inactivity in June of 2018, believes Joshua will lose the repeat fixture.

In referencing Ruiz’s much publicised fleshy physique and his own win over Wladimir Klitschko in 2015, Fury told 5 Live Boxing’s Mike Costello and Steve Bunce that such results prove “body types mean nothing in boxing.”

“Physically Joshua could out-train everyone,” added Fury, 30. “He would break every heart monitor, has probably worn out every treadmill in the gym, smashes the bag, it’s all very unimportant.

“Boxing isn’t rocket science and today people are trying to make it a scientist thing. If you can fight you can fight if you can’t you can forget about it. You can eat every protein bar in the world, when you get banged on the chin and panic, it don’t really help you much.

“People who don’t understand boxing look at a fight man and think he can’t fight. The best feeling I got from it was the two best conditioned fighters in the last 20 years have been Klitschko and Joshua and they both got done by two fat men.”

Undefeated Fury is a 1-25 favourite against Schwarz in his first fight since his epic draw with Wilder in December, where many ringside observers felt he should have been given a points victory despite being floored twice.

Both his and Wilder’s team have loosely agreed a rematch in 2020, though a venue has not been agreed and financial terms have not been negotiated.

Fury, who lost around 10st in the 12 months leading up to the contest, says his relationship with Wilder is now strained which he puts down to the American knowing he should have lost their Los Angeles contest.

“If I was a match fit fighter and some fat man comes off drugs and alcohol and done that to me I’d never look at the sport again,” said Fury.

“Does Deontay Wilder have anything to bother me? Nothing at all.

“I’ve been hurt 1,000 times but Wilder didn’t hurt me once. He hit me in the back of the head, scrambled my senses and the last knockdown was a touch of sleep but didn’t hurt me. Those same punches that caught me then are not going to touch me when I’m match fit.

“They thought I’d be half the man. I had to con them to think I was only there for a pay day. I couldn’t be at my best but still beat him at nowhere near my best. He isn’t man enough to face me anymore or speak to me. He used to text me back and forth. I’ve text him five times and he hasn’t replied once.”

Schwarz, 25, is unbeaten in 24 fights and impressed 5 Live’s Bunce with his movement when he and Fury performed open workouts at the MGM Grand Hotel on Tuesday.

Saturday’s contest – which will take place early on Sunday in the UK – will be Fury’s first on his lucrative deal with ESPN and his team were keen to pick a bout which would lend itself to showcasing their fighter on his new broadcast platform.

Germany’s Schwarz has therefore been largely written off but Fury warned his opponent has been training while he has shouldered the majority of the media commitments both in the UK and US.

“Any man who is unbeaten and his full life changes with a win, I don’t take that as an easy fight,” added Fury.

“All it takes is one or two punches. That is all it takes. If you’re 12 rounds ahead and get knocked out it’s pointless. So I am not convinced it’s easy.”

Tyson Fury to fight unnamed opponent in London in December