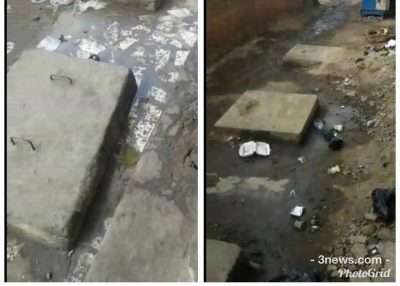 Residents, customers, traders and shop owners at a portion of the Ghana’s spare parts hub, Abossey Okai in the Ablekuma Central Municipality of the Greater Accra Region, can no longer cope with the stench from a rented police barracks which houses some personnel of the SWAT Unit of the Ghana Police Service.

The stench, which emanates from a leaked manhole of the rented barracks, splashes the entire area anytime there is a flush of the water closets in the barracks.

This, according to the traders and residents, has led to the closure of their shops since it started on Friday, August 23.

They said all efforts to get the police personnel to repair the leaked manhole have proved futile.

The rented two-storey building in the area called Abossey Okai Police Quarters has stores under but houses dozens of SWAT police.

The place shares a common wall with other stores and traders, customers and shop owners say the issue is affecting their health and businesses

Onua FM’s Yen Sempa reporter, Joshua Nyatsidzi, visited the scene on Thursday and reports that most shops have been closed due to the stench which is affecting their businesses.

Some shop owners and traders explained that they have to close their shops anytime the police flush their water closets.

They said they have made several complaints for the broken manhole to be fixed but the occupants have been adamant.

They added that they close their shops but customers who have their telephone numbers call them before they can serve them.

Some food vendors said they cannot sell again due to the stench, which is also keeping them out of business.

The Police Sergeant in charge of the Barracks, Abubakar Fuseini, said “the manhole leaks whenever it is full and not that it leaks always”.

“We were told last week Tuesday and I have told my senior man but as we are working…it’s a working day…here is a very busy area so we will do it by the weekend,” he assured.

Sgnt Fuseini added: “It’s not true that we have not desilted it for the past year. It takes 6-8 months to be full and [the traders and shop owners] are part of it because they also use the facility”.

Co-Chairman of the Abossey Okai Spare Parts Dealers Association Siaw Ampadu said the leadership was not aware of the situation but only heard it from Yen Sempa.

He observed that the place is a waterlogged area so such problems come when it is the rainy season but they are in good terms with the police there.

Mr. Siaw Ampadu promised that he will speak to the land lord to make sure the manhole is desilted as soon as possible because it has health implications.