US President Donald Trump has arrived in Saudi Arabia on his first foreign trip since becoming president.

His eight-day trip will also take in Israel, the Palestinian territories, Brussels, the Vatican, and Sicily. It comes as Mr Trump faces uproar at homefollowing his sacking of FBI director James Comey. He has strongly criticised the decision to appoint a special counsel to oversee an inquiry into alleged Russian influence on the US election. The trip takes in the capitals of the three major monotheistic religions – Islam, Judaism and Christianity. Hours before Mr Trump’s arrival, Saudi air defence units said they had brought down a rocket south of the capital, Riyadh, that was fired from Yemen by Houthi rebels. Saudi warplanes are reported to have carried out retaliatory strikes on targets close to the Yemeni capital, Sanaa.

“We want you to be a superpower” is how a senior Saudi prince recently described to me the kingdom’s message to the United States. From day one, Saudi rulers hailed the arrival of President Trump, and what they believe will be greater US engagement in this region. There’s much talk of “turning the page” on what they saw as President Obama’s infuriating retreat in Syria, and his focus on a nuclear deal with Riyadh’s main rival, Iran. [caption id="" align="alignnone" width="601"] 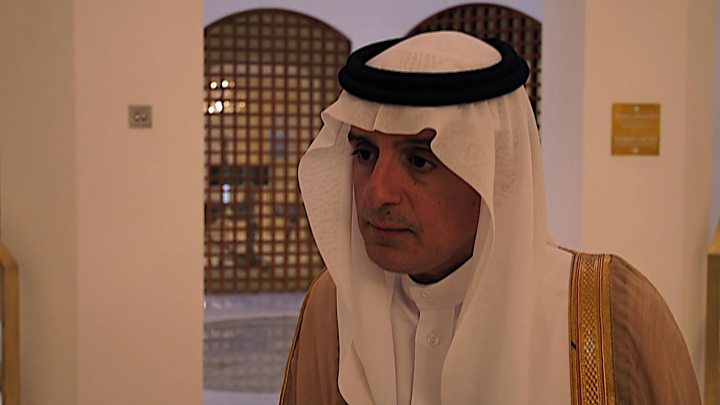 Saudi Arabia’s foreign minister: Donald Trump’s visit is a ‘coup for peace and coexistence’[/caption] Saudi Foreign Minister Adel al-Jubeir admitted to me it was “a diplomatic coup” to claim the first stop on the US president’s first foreign visit. Other historic first steps may be taken here too. Another senior official in the region disclosed that Arab states are now discussing moves to start “normalising” relations with their old arch-enemy Israel. This Riyadh summit will focus on new alliances to confront extremist groups. And the Saudis’ overriding goal is to convince the US and others to exert far greater pressure on what they see as the greatest threat, from Tehran. Mr Trump will attend the Arab Islamic American Summit in Riyadh and speak about his “hopes of a peaceful vision of Islam”, in what aides say will be a speech the president hopes will resonate worldwide and express “a common vision of peace, progress and prosperity”. Mr Trump caused controversy during his campaign by calling for Muslims to be temporarily banned from entering the US over security concerns. Legislation aimed at restricting travel from several Muslim-majority countries remains tied up in the US courts. The summit agenda is expected to focus on combating Islamist militants and the growing regional influence of Iran. Mr Trump has been a fierce critic of the Iran deal which eased sanctions in return for a curb on its nuclear activities. One leader who will not be attending the summit will be Sudan’s President Omar al-Bashir. President Bashir is wanted by the International Criminal Court on war crimes charges and the US was reported to be unhappy about his planned attendance. Unlike his predecessor, Barack Obama, Mr Trump is not expected to highlight human rights during his trip. And aside from the formal diplomacy, US country music star Toby Keith will perform a free concert in Riyadh on Saturday alongside Saudi singer Rabeh Sager. Saudi Arabia, which enforces a strict interpretation of Islam including a total ban on alcohol, is perhaps an unusual venue for Keith – whose hits include I Love This Bar, Whiskey Girl, and Drunk Americans. Saturday’s concert is open only to men aged over 21, who are required to dress in traditional Saudi tunics.
READ ALSO:  Kenya's president asks for 'forgiveness'

Israel and the West Bank – Monday-Tuesday 22-23 May

On Monday, Mr Trump will fly to Tel Aviv and travel on to Jerusalem where he will meet President Reuven Rivlin. He is due to visit the Church of the Holy Sepulchre as well as the Western Wall before holding talks with Israeli Prime Minister Benjamin Netanyahu. Observers will be watching to see if Mr Trump refers to his announcement during the election campaign, that he would break with decades of US policy and move the US embassy from Tel Aviv to Jerusalem. The status of Jerusalem is one of the most sensitive and complex issues within the Middle East conflict and no country in the world currently has its embassy there. On Tuesday, Mr Trump will travel to Bethlehem in the West Bank for talks with Palestinian President Mahmoud Abbas. Peace talks with Israel will top the agenda and Mr Trump is expected to express his support for Palestinian “self-determination”.

Rome and Brussels – Wednesday 24 May

President Trump will arrive early in Rome and have an audience with Pope Francis. The two men have appeared at odds on many subjects including climate change and the plight of refugees, but the Pope has said he will give the president an open-minded hearing. Later, Mr Trump flies to Brussels where he will be greeted by King Philippe of Belgium and Prime Minister Charles Michel.

After talks with EU leaders and France’s new President Emmanuel Macron, Mr Trump will attend a meeting of Nato leaders. This will be closely watched after Mr Trump’s conflicting pronouncements on the alliance. During his campaign, he called Nato “obsolete”, although in April he reversed his stance. The US leader is expected to repeat his demand that other Nato members increase their contributions. The last stop on Mr Trump’s tour will be the picturesque Sicilian town of Taormina where he will attend a G7 summit. Correspondents say the other G7 leaders are eager to hear Mr Trump’s thoughts on trade and other issues at first hand. Mr Trump’s national security adviser has said that the president will “press America’s economic agenda and call for greater security co-operation”.
READ ALSO:  Cartoon: Bribery Tennis in Parliament
Source: BBC ]]>