The block for the primary school developed defects even before it was handed over to the school.

The contractor, Messrs Rolat Enterprise Ltd handed over the school building in 2016 despite the defect concerns raised by the Tano South Municipal Assembly and authorities of the school.

The school block has its  windows destroyed, cracked ceiling and worn-out floors.

At the time of handing over the facility, the six-unit block had no furniture and black boards.

This came to light when some members of PIAC and Institute of Financial and Economic Journalists (IFEJ) who are inspecting some oil funded projects in the Brong Ahafo region visited the school.

The head teacher of the school, Ali John was surprised at the amount quoted as the cost of putting up the six-unit block.

PIAC chairman Dr Steve Manteaw stressed Messrs Rolat Enterprise Ltd should be surcharged for the cost of the maintenance works to be carried out.

He was hopeful if contractors are surcharged for shoddy works done, it will encourage professionalism.

“I will strongly recommend that the contractor should be surcharged for the shoddy work done. Within two years of construction one can see the defects in the structure and a chunk of money including oil revenues were pumped into the building,” he lamented. 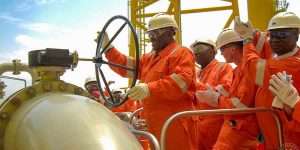