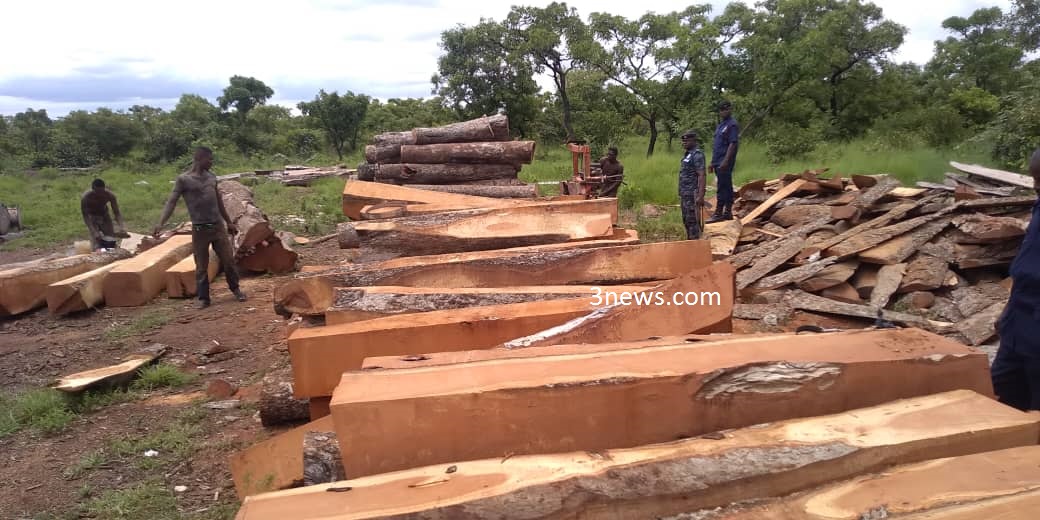 The District Security Council of the North East Gonja District of the Savannah region together with the Salaga District Police command, have impounded heap of logs suspected to be illegally felled rosewood. Four persons including the owner of the logs were also arrested by the police. This follows a decision by DISEC to clamp down on logging activities in the area. The suspects: Gilbert Annayi, 31; Kwame Donyina, 22; Stephen Owusu, 28; and Ekow Arhin, 37, were picked up while at site processing the logs. The freshly cut logs numbered over 300. The arrest took place at Debar, a farming community in the North East Gonja District. According to the station officer at the Salaga District Police Command, Inspector Martin Osei Bonsu, the police received information that “serious logging” was going on in the community. “The police with the help of DISEC quickly mobilized some men and went to the community where the logs were heaped, we impounded the logs and arrested the workers” he stated. He assured the police service will continue to cooperate with the public to ensure adequate security in the area. Savannah Regional minister Adam Salifu Braimah declared war on illegal felling of trees when he assumed office. He has since closed down two Chinese companies in Damango and Busunu engaged in processing and exporting rosewood. Meanwhile, the Salaga Magistrate court presided over by His Worship David Sebiyem has granted eight thousand (8,000) cedis bail each to the suspects with one surety to reappear in court on September 16. They were charged with, harvesting Forest Product Without Lawful Authority, contrary to Section 1(1a&h) of the Forest Protection Decree NRCD 243/1974 as Amended by Act 624/2002. As at the time of filing this report, two of the suspects Kwame Donyina and Stephen Owusu met the bail requirements and were granted bail. Mr. Sebiyem lamented over the indiscriminate felling of trees which is destroying the environment. He directed the police to ensure the logs are conveyed to the police station for safekeeping. By Christopher Amoako / 3news.com]]>