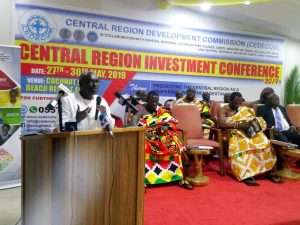 An investment consultant and a renowned entrepreneur, Dr Ishmael Yamson has urged local government authorities in the Central Region to develop a policy that will attract investors to the region to create jobs and boost the local economy.

He observed the region is endowed with many natural resources and only needed a vigorous development plan to attract the right potential investors.

“This…should not be a political issue, the moment you bring politics into this, it becomes a four or eight year thing and that ends there…The development of a region or a nation is beyond four or eight affair,” he said.

Dr Ishmael Yamson said this at the opening of the maiden edition of the central region investment conference in Elmina, on the theme: “Projecting the Central Region as the preferred investment destination”.

He has also urged the various traditional leaders to strive to release litigation free lands to prospective investors for businesses in the region.

“No investor will want to do business where the basic need like land is a problem so please i urge you to look into that,” he stated.

Dr Yamson asked institutions that have been mandated to promote the economy within the region to be adequately resourced by government to be efficient.

He said the region would be developed if there was commitment from both the private and public sector.

He pledged the support of the Central Regional Coordinating Council to ensuring the region becomes attractive for investment.

Commenting on the theme for the conference, he called for renewed commitment for development in the region to ensure the desired economic growth.

“We want to see a new a new Central Region where there will be more industries and business to spur economic growth. We want to see more jobs created to absorb our youth,” said.

Obrempong Krampah said opportunities to create  wealth out of the natural resources is what the Region seem to lack, noting the narrative could change if there was a development roadmap for the region.

Meanwhile, he called on government fix all deplorable roads, especially areas that have better business opportunities to attract investors.

“The poor road network within the region presents a challenge that must be addressed particularly by the sector minister,” he pleaded.