Home News If civilians are licenced to use guns, why not MTTD officers? –...
Facebook
Twitter
WhatsApp
Linkedin
Telegram
Email
Print 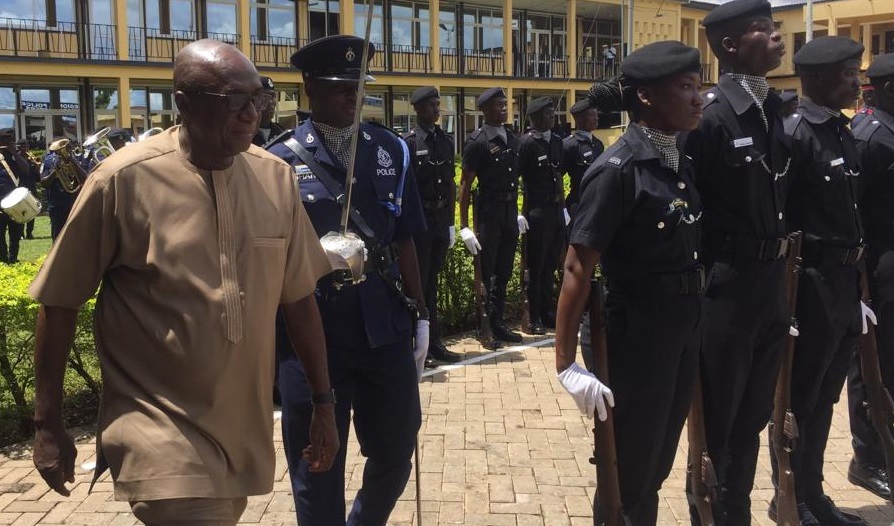 Interior Minister Ambrose Dery has justified the decision to arm all traffic police officers in the country, rejecting criticisms that such move is likely to threaten civilians in the country. On the back of recent killing of 30 police officers in the last month, particularly the two personnel of the Kasoa Motor and Traffic Department of the Police by some suspected robbers, the Minister directed the police to arm all of its traffic officers. The decision has triggered concerns from some security analysts who contend arming motor traffic police officers will put the country under threat. “Because of one incident, we should put the whole society at risk?” Security expert Dr. George Hackman wondered on Accra-based Onua FM on August 30. Adam Bonaa has also cautioned against arming traffic police as it could open the floodgate for unwarranted shooting of motorists. In his view, they should be given pepper spray and tasers among others instead of giving them guns. MTTD officer trained to handle weapons But the Interior Minister has defended his decision, insisting MTTD personnel are trained police officers who know how to handle lethal weapons, hence no need for anyone fear. “For those who have issues with us arming the police, especially officers of the MTTD, let me remind them that they are all police trained, know how to handle arms and have only been assigned to take care of traffic” he said. Mr Dery who is in the Ashanti Region to access the security situation, indicated that there is no cause for alarm, arguing that if the public does not see any threat in individuals acquiring licensed guns then there is nothing to fear if MTTD personnel are armed. For him, “If that is not a threat to peace, how can arming trained competent professionals of the Ghana Police Service be a threat to society? That cannot be!” he stated. According to the Minister, the decision to arm MTTD personnel is not only intended to protect them but also help them in fighting crimes such as armed robbery on the road. Without weapons, he observed MTTD officers will be helpless in armed robbery situations and could even be killed. “When there is an effort to fight violent crimes such as armed robberies, the armed robbers are pursued on the road, without that protection, without that capacity, the MTTDs will only stand helpless, they cannot partake in pursuing the criminals and by their uniforms, they become easy targets to be killed; we cannot allow that to happen,” he stated. He reiterated government’s commitment to adequately equip the police service and other security agencies. Ambrose Dery has been on a two-day working visit to the Ashanti region to assess the security situation. The minister interacted with personnel from the Ghana National Fire Service where he disclosed the Government is procuring two hydraulic platforms to help in effective fire fighting. He also engaged personnel of the Prisons Service to better appreciate their concerns. The interior minister assured all the men and women in uniform that, none of them will be taking out of the CAP 30. By Ibrahim Abubakar|3news.com|Ghana]]>

Police to intensify visibility on highway to reduce road accident

Reduce allocation to the office of gov’t machinery by 25% –...

Amankwah Mireku criticises Hearts of Oak players after 4-0 defeat in...