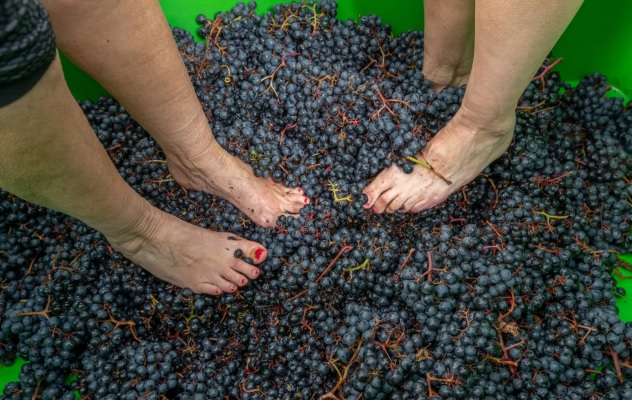 An English vineyard which hosted a day of traditional barefoot wine making subjected volunteers to a fungal foot check, promising “clean feet only” for its guests.

Renishaw Hall in Derbyshire on Saturday opened its doors to members of the public to help stomp their grapes to create Christmas sparkling wine.

A first for the region, volunteers macerated grapes by squashing the fruit with their bare feet; a traditional process which has taken place across wine countries for over a thousand years.

Before the fun began organisers requested “no minging feet” as they now plan to sell the produce for the Christmas season, revealing wine makers were sure to scan feet for any fungal faux pas.

Renishaw Hall spokesperson Jane Travis said: “With a natural process there will be the odd bug and leaf. We won’t be adding any chemicals to the wine so there are polite questions being asked when people remove their socks.

“As people take off their shoes we can give a quick health and safety check looking out for athlete’s foot, bunions, verrucas and so on. We would like people to be able to enjoy the wine over the festive season.”

Her husband, winemaker and vineyard tenant Kieron Atkinson, said that for any potential drinkers they could rest assured that no germs would be left in the wine, but highlighted prior to the stomping that “no minging feet are allowed”.

He explained that during the juice and fermenting process bugs die off, adding: “All the sugars are converted into alcohol which again kills off any germs so people can be safe in the knowledge they are free to enjoy the wine.”

The natural foot stomping method has not been used in any of the UK’s vineyards this year and it is the first time the practice has been used in the North of England, whilst some vineyards in the South have trialled it in the past.

Mr Atkinson said that after the increased popularity of products such as craft beers in recent years it had become clear that people were looking to try something different and experiment with new flavours.

“We’ve always produced good wine and the vineyard has been here for 46-years so it’s well established,” he said. “But we also want to keep offering people something different, and we think it’ll appeal to the local areas of Derbyshire and Sheffield where craft beer has been extremely popular.”

This is the first time the vineyard has invited members of the public in to stomp their grapes, something Mr Atkinson said was as a result of the hot summer weather this year producing better quality and riper fruits.

The juice generated will go on to produce a natural method sparkling wine, known as ‘Pet Nat’ – Pétillant Naturel.

The wine will then be naturally fermenting and ready to sell by Christmas – two years earlier than traditional method sparkling wine takes to be ready for sale.

Mr Atkinson added: “This wine will be a superb product to buy at Christmas. What better gift to buy someone than a 100 per cent pure, local, sparkling English wine made by entirely natural methods.”