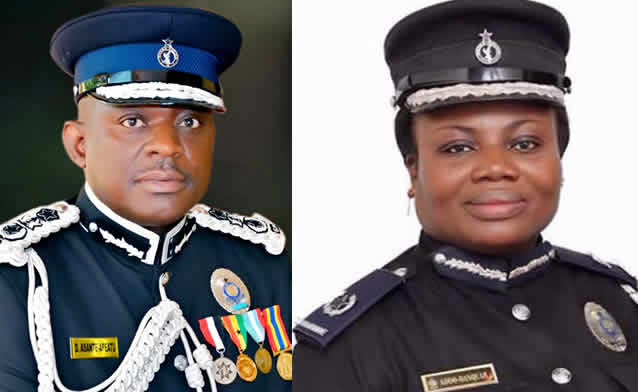 The Inspector-General of Police (IGP), David Asante-Apeatu, and the Criminal Investigations Department (CID) boss, Maame Tiwaa Addo Danquah have for the third time failed to appear in court to respond to contempt charges against them over their refusal to comply with a bail order for Gregory Afoko. Their failure to appear led the judge, Justice Jenifer Dodoo to adjourn the case as she insisted the two top officials had to appear in person to face the charges. It is, however, unclear the reason for their non-appearance this time. The case was adjourned during the last hearing because the two officials had travelled out of the jurisdiction.

The summoning of the two by the court followed the disregard of a court order in March 2019 granting bail to Mr. Afoko. The judge was expected to deliver a ruling on whether the inaction of the two security chiefs was contempt of court. Mr. Afoko was admitted to bail in the sum of GHC500,000 with two sureties in March 2019. Afoko’s trial started in 2016 and was nearing completion after the prosecution and the defence counsel closed their cases. But on January 28, 2019, the Attorney General filed a nolle prosequi to discontinue the trial following the arrest of another suspect, Asabke Alangdi, who had been on the run. Afoko and Alangdi were then put before the Accra Central District Court on provisional charges of conspiracy to commit murder and murder. Mr. Afoko challenged the discontinuation of the first case but the Supreme Court ruled that the Attorney General did nothing wrong. According to the court, Mr. Afoko failed to prove that the Attorney General was unfair and unreasonable while exercising its constitutional powers. But one of the judges, Justice Gabriel Pwamang in his concurring judgment said, going forward, the Attorney General must be more transparent in exercising such powers as it may have some consequence on public confidence in the criminal justice system.
READ ALSO:  I'll be amazed if any tertiary institution is unaware of accreditation guidelines  - Kofi Asare
By citinewsroom.com ]]>