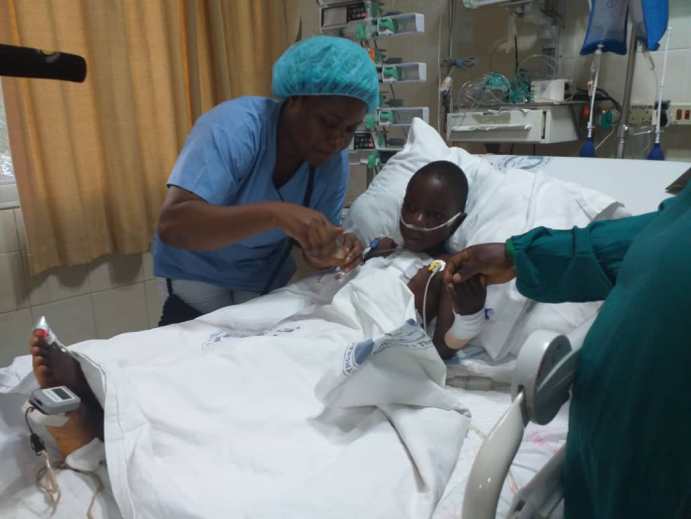 A 5-year-old boy, Reynold Esuahdoh, with a hole-in-heart condition has undergone corrective surgery for his condition and is recuperating at the Korle-Bu Teaching Hospital.

Reynold, who was diagnosed of Tetralogy of Fallot, a variation of the hole-in-heart condition, has been living with the defect since birth, but thanks to the benevolence of some donors through Media General’s 3Foundation, his condition has now been corrected.

Heart surgeon Dr. Lawrence Sereboe, told 3news.com that Reynold’s surgery was without complication, adding that it was one of the ‘smoothest’ open heart surgery he had ever done.

His surgery was catered for through a collaborated effort by Media General’s 3Foundation and the MTN Foundation, which paid $6,000 for the surgery.

Mother of Reynold Grace Selasi Akortia expressed gratitude to the 3Foubdation for their support.

Dr. Sereboe commended 3Foundation for their support, adding that heart surgeries on the average were beyond the means of most parents whose children are with the condition.

“When we tell the mothers that their children have hole-in-heart, they become depressed. She is fortunate that she had MTN Foundation and 3Foundation,” he added.

For two years running, MTN Foundation has been supporting the 3Foundation, quarterly to sponsor hole-in-heart surgeries at the Korle-Bu Teaching Hospital in tri-party collaboration.

Reynold is part of the beneficiaries of the second quarter of this year with funding fully settled for all the other beneficiaries.

The CSR Manager for Media General, Adriana Akosua Adjei, entreated corporate organizations, individuals with means, and foreign donors to also follow the initiative and support the 3Foundtion to reduce the cost of surgery for people who need it most.