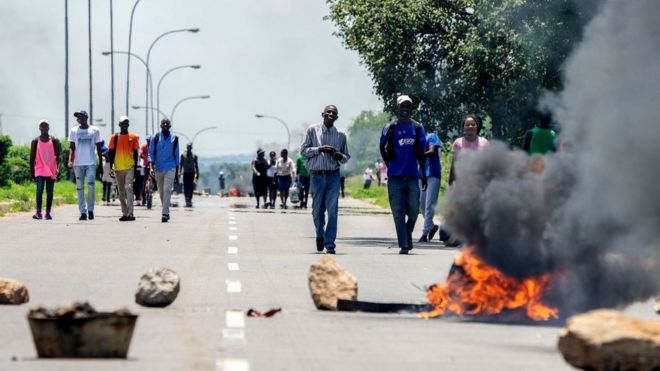 Protests erupted over a steep increase in fuel prices[/caption]

Zimbabwe’s President Emmerson Mnangagwa has said he is “appalled” by an attack by security officials on a protester that was featured in a TV news report.

His statement comes after widespread criticism of the way security forces have handled recent protests. Mr Mnangagwa said he has ordered the arrest of those behind the attack seen in a Sky News report. His condemnation has received a mixed reaction with some calling him “uninformed”. The state-funded Zimbabwe Human Rights Commission has accused soldiers of using “systematic torture” in the crackdown on protests. In a report, that has since been removed from its website, it strongly criticised the authorities for using troops to quell demonstrations. There have also been reports of a number of deaths. The report by Sky News shows a handcuffed man being pulled away from a van by a soldier and at least one police officer. He is then seen being repeatedly beaten around the head by one of the officials. President Mnangagwa said on Twitter that this was “not the Zimbabwean way”. Reacting to the tweet, many have criticised the president. Nigel MK Chanakira said: “We have many wounded whom we may show you. Are you honestly so uninformed about what is going on in our country?” Another echoed theses sentiments saying “what’s appalling is our president only stating now that he is appalled after all that’s happened”. Unrest broke out a fortnight ago following a more than doubling in fuel prices, making it the most expensive fuel in the world according to GlobalPetrolPrices.com . Last week a government spokesman defended the crackdown, telling the BBC: “When things get out of hand a bit of firmness is needed”. The continuing violence raises further questions about President Mnangagwa’s control over the military, which helped bring him to power 14 months ago.
READ ALSO:  Huge explosions rock Equatorial Guinea's main city
Source:BBC ]]>