The Presidency has replied the Auditor-General, Daniel Yaw Domelevo, following his recent response to the directive of President Nana Addo Dankwa Akufo-Addo for him to proceed on leave.

Written by Secretary to the President, Nana Asante Bediatuo, the reply to Mr Domelevo raised concerns about the impression the latter attempts to create in the public domain that the president acted in contravention of the law.

“The President has at all times acted based on sound legal principles, the rule of law and good governance practices, and the good people of Ghana cannot be misled by your lack of understanding of the position of the law, for which you may be forgiven since you are not a lawyer,” the reply dated July 3, 2020 said.

It admitted that the Auditor-General’s letter, which contests the order to proceed on his accumulated leave, has not yet reached the Presidency but the content duly noted as it has already made rounds on social media. 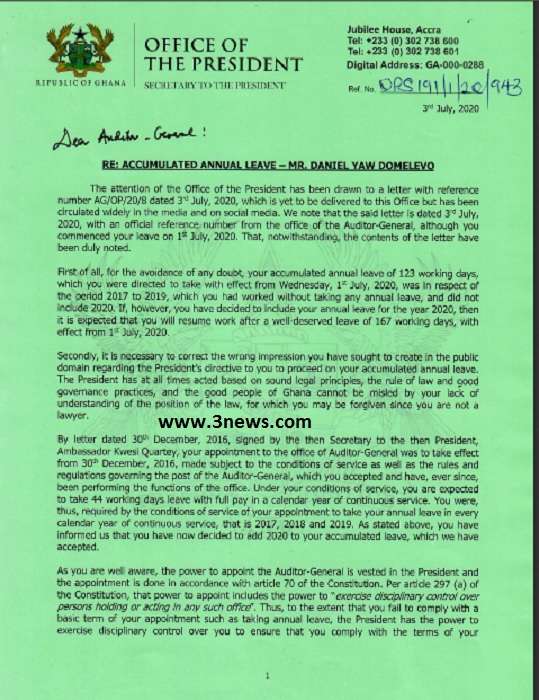 President Nana Addo Dankwa Akufo-Addo has expressed revulsion at the gruesome murder of 90-year-old Denteh Akua at Kafaba in the...

More than 100 can worship as Akufo-Addo lifts restriction on churches, mosques

Akufo-Addo travels to Mali on Thursday