Work at Takoradi Flour Mills grinds to a halt 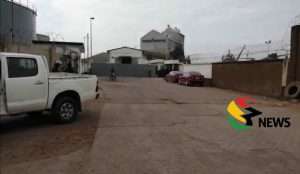 Work at the Takoradi Flour Mills has ceased following a misunderstanding between the workers and management.

The workers have for the past one month been agitating for the removal of their expatriate General Manager Thierry Loupiac.

The workers have accused Mr. Loupiac of gross disrespect and unruly behavior towards them.

They claim that the Frenchman will without any provocation spew unprintable words on them.

This attitude, the workers say, has demoralized them and want him removed.

The workers on July 10 forced Mr. Loupiac out of his office following a decision by the workers union.

The workers subsequently poured libation evoking curses on any colleague who will interfere in their quest for the removal of Mr. Loupiac.

When 3news visited Takoradi Flour Mills Tuesday August 6, 2019 the main entrance to the company was under lock and key.

About 10 armed personnel from the Takoradi RDF led by Commander Achaab were stationed close to the entrance.

About seven trucks branded Takoradi Flour Mills were also packed at the entrance.

The loading gantry in the compound was empty pointing to no work.

A source at the company explained that all the workers have been asked to go home.

This, the source added, is perhaps in response to recent disturbances from the workers.

But the source maintained that the workers have always expressed their utmost willingness to work save that they do not want to work with Mr. Loupiac.

About five union executives were seen around the loading gantry trying to enter the administrative block.

Our source explained the executives were there to meet management to resolve the issue.

Epidemiologist wants military-police enforcement of ‘No Mask, No Entry’ policy

Police urges public to disregard call to demonstrate against US