Lydia trying to breastfeed one of the babies[/caption] A woman who delivered quadruplets at the Salaga Government Hospital and could not produce enough breast milk to feed them has lost one of the babies. The 28-year-old Lydia Gurmah delivered on August 31 and had difficulty producing enough breast milk to feed the four babies forcing midwives at the facility to contribute on daily basis to buy baby food supplement for the children. “The babies are doing well, as well as the mother but the stress of delivering quadruplets is affecting the mother psychologically thus her inability to produce enough breast milk,” the  maternity ward in-charge, Ms Genevieve Bakari, stated.

She said the babies were surviving on NAN, a supplementary food for babies, and appealed to the public to support the mother financially to provide for the babies. But on September 8, one of the babies died. Sources at the hospital said the baby had a condition which was not detected early. According to the sources, the baby could not pass stool and urinate. Meanwhile, the Municipal Chief executive for East Gonja, Mohammed Tamimu, has presented an undisclosed amount of money to the mother of the quadruplets, following the story by 3news.com that highlighted the plight of the woman. 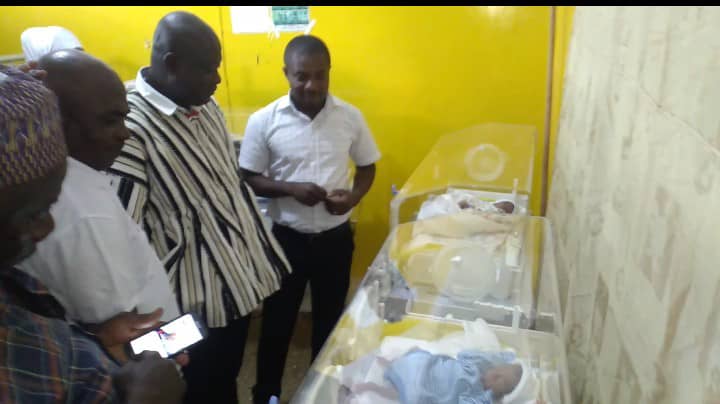 According to the MCE, he was touched after reading the story and immediately had to mobilize something small for the mother of the babies. He expressed gratitude to 3news.com and the midwives of the hospital for making the plight of the woman and the babies public to solicit for funds for her. He appealed to the general public who have the financial muscles, to come to the aid of the babies. “I have come to see the babies and they are really tiny. The parents are really poor looking at them and so they need support to survive,” the MCE observed. The woman commended 3news.com for the publicity which she said has begun yielding some results, and appealed for more for the babies.
READ ALSO:  20-yr-old lady attempts suicide to protest 'exchange marriage' in northern Ghana
By Christopher Amoako|3news.com|Ghana]]>