Home Lifestyle Will you give breasts to your man or baby?
WhatsApp
Facebook
Twitter
Linkedin
Telegram
Email 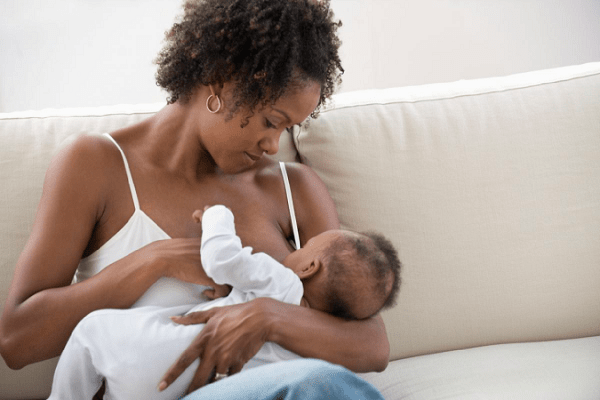 The breast, the most important external identification of females consists of 15 to 20 clusters of mammary glands surrounded by fatty fibrous tissues to give the breast its consistency. The amount of fat determines the size of the breast. The milk producing part is organised into lobes which have lobules where milk is produced and travels into and which connects and exits the skin in the nipple, the prominent tip of the breast. The nipple consists of smooth muscle fibres which when contracted makes the nipple erect. Around the nipples is a circular pattern of dark skin called areola which has many nerve and muscular fibres that can cause the nipple to soften, become erect and give sexual pleasure. A woman’s nipples are among her most erotic parts because it has a network of nerve endings which make it highly sensitive.  Women and breast         Women evolve fatty deposit around the mammy glands for sexual reasons. Anthropologist Owen Lovejoy argues that evolution put a bull-eye around both male and female organs to promote their bonding. In theory, female breasts got a lift, while men acquired relatively large penises for their bodies. This explains why a man has the biggest size of penis among primates. Every woman’s breasts are unique and can, therefore, be used to identify a woman. Again, according to Healthy Woman Magazine, for a woman, no two breasts including the nipples are the same in position and size. In most women, the left breast is usually slightly larger than the right. Some have cute breasts and some have big breasts. Some are tubular, some saggy and some snoopy. The breasts normally grow for about two to four years after a girl gets her first period. Even for an individual, the breast changes at different times during a woman’s life; before, during and after adolescence, during pregnancy, during menstrual cycle and after menopause. Studies show the average woman in the United States of America  wears size 40D bra. Another thing; unlike the penis, the size of breasts matter because studies show the breast size play a role in a woman’s  physical, mental and emotional well-being because women identify their self-esteem by the size of their breast. Studies show being dissatisfied with your breast size can harm your self-image and mental health. According to a study published in the Journal of Plastic and Reconstructive Surgery, asymmetrical (uneven) or macromastia  (abnormally large) breasts can lead to mental health problem from low esteem to eating disorders. This explains why many women in the advanced countries go in for breast augmentation surgeries and breast lifts. For example in 2013 alone, there were 300,000 breast augmentations with implants in America, while breast lift without implants grew at twice the rate. It is also known that a woman with large breasts has higher levels of the hormone, estradiol, mid cycle which could increase her fertility. Again, studies show a woman who loses her breasts through surgery feels insecure, inferior and undesirable by men. Studies again show sensitivity of the breast  varies in women but the size of the breast has nothing to do with how a woman responds. Response of breasts during sex does not depend on the size or elasticity of breasts. Some women with small breasts respond instantaneously, while some women with big breasts have lesser stimulation with their breasts. Another study seems to suggest that Ghanaian men prefer women with large breasts. Therefore, the size of breasts matter and very much but one thing is certain; breasts are symbols of beauty, breasts are beautiful!

READ ALSO:  More evidence essential oils 'make male breasts develop'
Babies and breasts Breasts produce milk supplies – all the necessary nutrients a baby needs in proper proportions. Milk protects babies from many allergies and diseases including diabetes, diarrhoea or upset stomach. It is easily digested. It is also known that babies who are breast fed have healthier weights as they grow and score higher IQ tests. Milk, therefore, helps to keep babies healthy. When a woman’s breasts are stimulated during breast feeding, the neurochemical oxytocin known as ‘love drug’ floods her brain helping her focus her attention and affection on her baby. Some women get so attracted to their babies through breastfeeding that they tend to neglect their men and lose interest in sex. To be continued… By Dr John Boakye|email:[email protected]|Graphic Online]]>