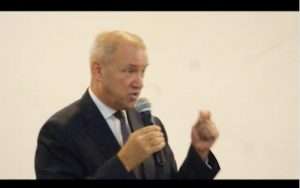 The Netherlands Ambassador to Ghana, Ron Strikker, has questioned why the Government of Ghana would rather not pursue what he has termed a “Ghana Beyond Corruption” as against the “Ghana Beyond Aid” agenda.

Mr. Strikker observed  during the 20th anniversary launch of Ghana Initiative Integrity (GII) Thursday that, corruption is a bad phenomenon which dissuades foreign investors from coming into a country.

“You need a good business climate to attract foreign investment…”, the diplomat said when he took his turn to speak.

“Corruption is a very bad thing and companies suffer and will stay away if they think that they are going to be harassed by corruption in a certain country…”, he added.

The comments of the diplomat come on the back of some corruption allegations against the Akufo-Addo-led government, with the recent cases being the Public Procurement Authority (PPA), National Youth Authority (NYA) and the infamous PDS- ECG deal.

Former GII Executive Director, Vitus Azeem, who was also spoke at the event observed corruption gets worse with every new government, a comment he said, has been widely interpreted to mean the Akufo-Addo-led government is the worst in terms of corruption.

However, the  anti-corruption campaigner said his statement was open to interpretation.

“I said well, take the English Language, ‘every new government that comes, the corruption is worse’”, he reiterated.

Meanwhile, a professor at the Department of Political Science of the University of Ghana, Professor Joseph Atsu Aryee, said it is embarrassing for Ghana to have recorded below average in the global corruption index.

The Institute for Democratic Governance (IDEG) fellow who focused his speech on the theme “Celebrating 20 years in the fight against corruption” said the cause for the widespread of corruption in the country is as a result of ineffective national integrity system.

GII is a non-partisan, non-profit civil empowerment organisation focused on the delivering of essential themes necessary for a national integrity system was launched in December 1999