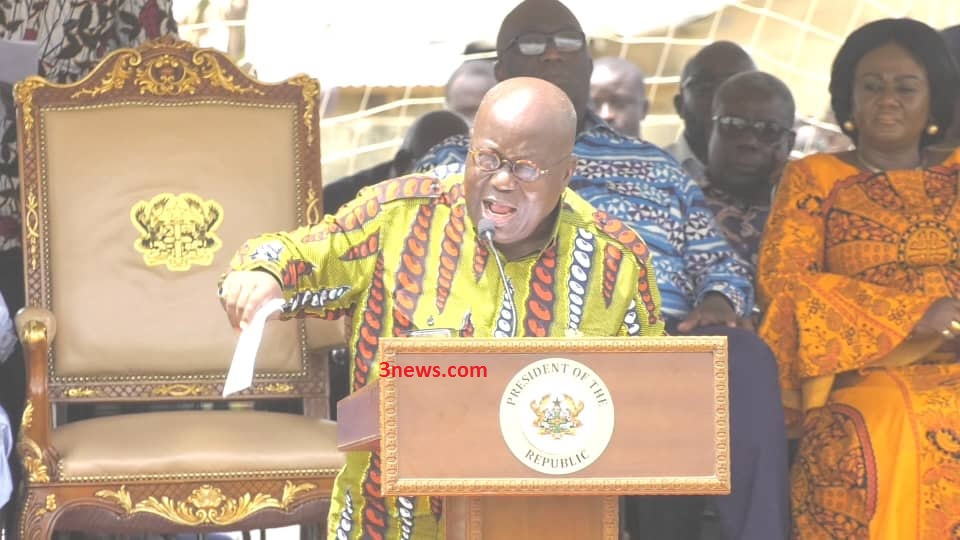 President Nana Addo Dankwa Akufo-Addo says incessant pleas on his government to construct roads everywhere he goes, clearly make mockery of the ‘unprecedented road infrastructure’ the Mahama government claimed to have built. “Among the top pleas from Chiefs and people everywhere I go on my tour of the country is road construction and yet the previous government says it embarked on an unprecedented road construction” the president said Tuesday. Speaking at a durbar of chiefs and people of Wassa East as part of his two-day working tour of the Western Region, Nana Akufo Addo wondered the areas Mahama’s unprecedented road infrastructure were constructed. For the president, if it was true, he would not be overwhelmed by pleas for roads to be constructed. “It means you [Mahama] did not tell Ghanaians the truth, you did not do the work you promised to do. We have come to do the work well. So allow us to work for Ghanaians,” Nana Akufo-Addo said. For his part, chief executive of COCOBOD, Joseph Boahen Aidoo, said the Mahama government left behind 5.1 billion-cedi debt on cocoa roads, indicating1.8 million cedis has since been paid to contractors. “Despite this amount the cocoa road are still bad. I have seen Justmoh [contractor] the road he worked on here in Wassa East the certificate is still there he has not been paid. So all the contractors are not willing to move to site. Ever since we came all what we have been doing is to pay debts,” he said. Responding to Mahama’s recent comment that cocoa farmers are worse off under the Akufo-Addo administration, Mr. Boahen Aidoo challenged the former President to tell Ghanaians what he did to better the lot of the farmers. “Former President Kuffour came to meet an annual cocoa yield of 380 thousand metric tonnes but before he left office Ghana was doing 750 thousand. Late former President Mills took it to 1m metric tonnes. But as at the time former President Mahama was leaving office the annual yield had dropped to 740 thousand metric tonnes”. He said it was former President John Kufuor who introduced the mass spraying and high tech fertilizer that saw the record annual cocoa yield. “Government was subsidizing the cocoa for the farmers but former President Mahama made it free. But interestingly instead of the yield to increase it rather decreased. From our checks we realized the fertilizers were being smuggled to Ivory Coast and Nigeria” Mr Aidoo stated. Under Mahama, he said: “cocoa farmers at Sefwi Atifi who were harvesting 340 thousand metric tonnes annually were doing 140 thousand. Again our checks saw that cocoa trees were dying due to the swollen shot virus. The intervention at that time proved counter – productive”. “Now we have introduced the hand pollination and has for the past years, employed over 50,000 Ghanaians. The result is that cocoa trees that were bearing five pods can now bear 150 pods”. Mr Aidoo also mentioned pruning as another government intervention which he said has seen 10,000 people employedand has also led to an increase in cocoa yields. “We have made arrangements for new machines and very soon the cocoa farmers will no longer use machetes to weed but the machines. And these machines will enable the cocoa farmers weed large areas in small time” Mr Aidoo said.

NPP underestimating anger of Ghanaians; booing Akufo-Addo was a reflection of the mood – NDC

I was disappointed Akufo-Addo didn’t appoint me – Addai-Nimoh