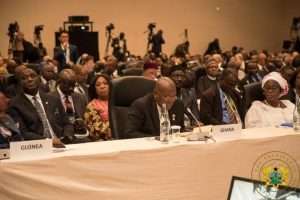 President Nana Addo Dankwa Akufo-Addo says his government, over the course of the last two and a half years in office, has succeeded in restoring fiscal discipline in the management of the economy, resulting in the macroeconomic indices pointing in the right direction.

According to President Akufo-Addo, the favourable macroeconomic situation prevailing in the country is a firm indication of his government’s commitment to the creation of a conducive business atmosphere needed for the private sector to flourish.

Speaking at the plenary session of the 7th Tokyo International Conference on African Development (TICAD) on Wednesday, August 28, the President noted that Ghana, and, indeed, Africa, “must emulate the story of the East Asian Miracle”, if the potential of the country and continent is to be realised.

He indicated that the East Asian Miracle saw, from 1965 to 1990, the 23 countries of East Asia, especially Japan, growing faster than all the regions in the world, largely because of their belief in the primacy of the private sector, and the critical support they offered to ensure it survived and thrived.

“We, in Ghana, are taking steps to put our country onto a similar path. Maintaining a stable macroeconomy is fundamental to attracting private sector investment,” President Akufo-Addo said.

He continued, “We have restored fiscal discipline, our macroeconomic indices are pointing in the right direction, we have implemented tax cuts and incentives to stimulate the rapid growth of the private sector, and we are projected, according to the International Monetary Fund, to be the fastest growing economy in the world this year.”

This, the President stressed, has led, in his time as President, “to some of the world’s largest vehicle manufacturing companies signaling their intention to set-up assembly plants in the country, with global energy giants investing in the development of our considerable oil and gas deposits, and the establishment of the first Artificial Intelligence Centre in Africa by Google in Ghana. Their decision to operate in Ghana is for good reason.”

Additionally, President Akufo-Addo told his colleague heads of state and governments that Ghana, under his leadership, is leveraging technology to help reform and improve the country’s institutional and regulatory processes, to develop a digital economy that is supporting sustained economic growth, and improving the wellbeing of our citizens.

“We are embracing fully the advancements made in the digital world to help drive growth and increased productivity of our economy,” he added.

Additionally, the President noted that if the aspirations and desires of Africa’s young populations for jobs, progress and prosperity, are to be met, then the structural transformation of Africa’s economies can no longer be postponed.

With the future of Africa and her economy going to be driven by the youth of the continent, President Akufo-Addo was confident that “they are going to build Africa, and we, in Ghana, are determined to provide them with the skills to do so. The vision is to build a free, prosperous, self-reliant Africa, an Africa Beyond Aid.”