Government has strongly denied claims that it has abandoned some health infrastructural projects started by the previous government.

“Government has never abandoned any health facility that was started by the previous government,” Health Minister Kwaku Agyeman-Manu stated Tuesday

The Akufo-Addo government has recently been criticized by some Ghanaians and groups, particularly from the National Democratic Congress, for allegedly abandoning the construction of some hospital facilities across the country which were started under the Mahama administration.

Some critics have questioned why President Nana Akufo-Addo has announced to build some 94 new hospitals across the country when ones already started with taxpayers’ money have been left to rot.

But at a news briefing in Accra Mr Agyeman-Manu said it is not true that the Akufo-Addo government has abandoned infrastructural projects in the health sector inherited from the previous government.

According to him, “nothing has been abandoned” indicating that some of those  inherited projects have been completed by the Akufo-Addo government  while others are currently progressing steadily with some challenges on a few.

He said construction work on some 10 clinics in the Central Region which was started in 2016 have been completed and commissioned.

Phase two of the upgrade of the Tamale Teaching Hospital Phase which started in 2015 has also been completed, he said.

Work on phase 1 of the 500-bed capacity University of Ghana Medical Centre  (UGMC), he noted, has been completed with phase 2 said to be nearing completion.

“We have completed phase 1. As I speak, phase 2 is getting closer to completion” Mr Agyeman-Manu said, noting the hospital is currently at 70 percent operationalization.

“We anticipate to complete the entire facility and operationalize fully by October this year,” he said.

Also, construction of Ministry of Health offices which he said they inherited and did some modification to, “has also been completed fully”.

He said a loan facility that had been arranged for the project had issues but indicated, “We’ve managed to clear the challenges we had with the project implementation and as I speak work is ongoing on these two projects…Hope to finish by close of the year”.

Touching on the construction of two regional and six district hospitals, the Minister said these were projects that were designed and loans looked for under President John Kufuor’s administration.

“Work actually started on some of the sites between 2009 and 2016. None of these 8 projects got completed. There were challenges” he stated.

The Wa Regional Hospital, he said, has been commissioned and in use, adding “We have completed the Ga East District Hospital” which he said is now being as a major treatment centre for covid-19.

“All other sites like Twifo Praso, Konongo Odumase, Nsawkaw, Tepa and Salaga are seeing progress,” he said, noting government is expecting to complete the Tepa and Nsawkaw ones by close of June.

“The rest will be completed around October or November,” he added.

On the construction of seven district hospitals and integrated IT systems in Boha, Fomena, Kumawu, Abetifi, Garu-Tempane, Sekondi and Takoradi, the Minister said there were challenges with the project.

According to Mr. Agyeman-Manu, in the first quarter of 2017 he wrote to the finance minister to renew the expired LC to enable the contractor secure funds to complete the projects.

“the previous government for some reasons refused to renew the LC to enable the contractor asses funding as far back as July 2016 so the projects were abandoned before we assumed office,” he explained.

He added: “The only one that had been completed and in use was the Dodowa project, others were at various stages of completion”.

Mr Agyeman-Manu said he has for the past three years to get the contractor to get back to work on the projects to complete same but without success despite several correspondents and engagements.

“On assessment we realize that if you compare money left sitting down as balance in the account and work left un-done, you could easily see that the money couldn’t complete the project so there was the need for some audit to be done,” he said.

That audit, he said, was conducted and the report advised that the contract was terminated yet he continued to use dialogue to get the contractor back to work while they resolve issues around the project.

But the Minister said the contractor has been evasive and declined to even provide government with some documentations including a bill of quantities which they requested for.

“We have decided to terminate the contract, look for another contractor who has capacity to come in to do the work”

He was optimistic that once government is able to resolve the issues on time, the projects could be completed by the end of the year.

Coronavirus cases in Ghana jump to 1,671 with 188 recoveries

‘No covid-19 clearance, no rent in Ghana’ – Gov’t to foreigners 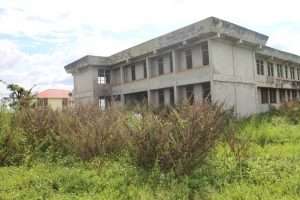 'No covid-19 clearance, no rent in Ghana' – Gov’t to foreigners