The National Identification Authority says it has not commissioned anyone or entity to recruit personnel on its behalf, describing a purported ongoing recruitment drive as a scam.

It said in a statement Monday that messages are being circulating on social media platforms that the Authority is recruiting staff for “newly created offices”.

Some people are said to have received messages like “Congratulations! You have been selected among those who are going to work for Al.4 permanently at NIA’s new created offices. WhatsApp 0578671035 for more details. Note: do not share this message to anyone”.

The NIA said it has not sent out any such message.

According to the Authority, the said recruitment is a scam and warned people not to fall for it, noting the NIA has not even created new offices as being claimed.

“For the avoidance of doubt, the NIA has not created any Regional, Municipal or District offices, neither has it commenced a recruitment process to staff any offices; claims or representations to the contrary, by any person or entity whatsoever are false” it said in the statement.

It said the security agencies have been informed about the fake recruitment messages for the necessary action to be taken.

Meanwhile it has asked the public including current and former staff of NIA to be wary of social media messages on NIA staff recruitment.

“NIA will follow appropriate public service guidelines and protocols in any effort to recruit staff for the offices it will create in future,” it indicated. 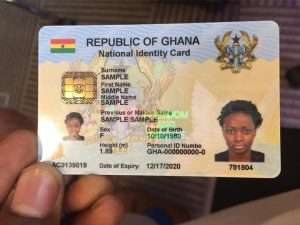 NIA to begin nationwide issuance of Ghana Cards from Monday