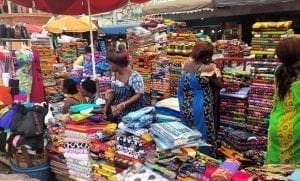 Deputy Trade and Industry Minister Carlos Kingsley Ahenkorah says the government can only ban importation of textile products into the country only when local companies are able to produce enough for the market.

Until such time, local textile manufacturers are able to produce enough for the Ghanaian market, he said, a number of measures are being introduced, including tax stamp to check importation of pirated textile or counterfeited prints.

The Coalition of Textile Workers in Ghana has persistently called on the government to ban the importation of textiles into the country claiming they are capable of producing enough for the nation.

The group, consisting of workers of Tex Styles Ghana Limited (GTP), Akosombo Textiles Limited (ATL), Printex Limited and Volta Star Textiles Limited, formerly Juapong Textiles claimed they were frustrated by the government’s inaction on clamping down on the activities of smugglers of textile products into the country.

They alleged that those who are pirating the designs of local textile producers and importing them for sale in the country at low prices are enjoying a field day.

But responding to the issues on Onua FM’s Yen Sempa morning show on Wednesday, Mr Ahenkorah, said the tax stamp on imported textiles will soon address the issue of pirated prints smuggled into the country.

He observed that “the importations of textiles have led to collapse of our textile industry”.