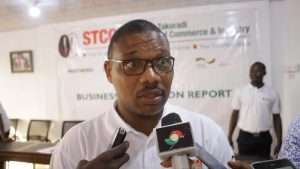 The Sekondi-Takoradi Chamber of Commerce and Industry has launched a business condition report of the Western Region with a call on government to take pragmatic steps to create the enabling environment for businesses to flourish in the country.

The report focuses on the first quarter of 2019.

The Western Region Business Condition Report is the findings of a thorough research undertaken by the Sekondi Takoradi Chamber of Commerce and Industry.

The aim, according to the Chamber, is to find out the state and challenges of businesses operating in the Region so that it can intervene and advocate on their behalf.

Factors considered in the research included the number of employees, factors limiting business activities, levels of investment, impact of electricity supply on business, among others.

Present at the launch were bankers, investors and other stakeholders.

Highlighting the findings, the Deputy Chief Executive Officer of the Chamber, Benjamin Nii Kpani Addy, said: “Finance remains a big issue for most businesses, they are not getting the right finance at the right price.”

He also added:  “The general environment is also a little difficult for businesses, depreciation of the cedi and inconsistent power supply. I think the local and central government should take pragmatic steps to solve them.”

After the presentation of the findings, some members of the audience had their take on it.

“The findings indicate Western Region is optimistic,” a banker said.

“Let’s see how the next quarter goes.”

A wood worker, who was also at the launch, said: “This is the first time we are witnessing this and I believe it’s going to help businesses in the Western Region.”

Agongo-Cocobod trial: There was no complaint on Lithovit fertilizer – CRIG scientist