The five siblings who were killed in a mudslide at Ngyresiah in the Sekondi-Takoradi Metropolis in the Western Region during a torrential rain have been laid to rest. The five siblings were sleeping when they were crashed to death on Friday, May 31. A bamboo tree that had been uprooted by torrential rains slid together with mud and collapsed a wall on them. The bereaved family, scores of pupils, MPs and MMDCEs in Sekondi Takoradi, heads of departments and other well-wishers attended the solemn burial service at the Sekondi Wesley Methodist Church to pay their last respect. Relatives and neighbours could not hold back their tears at the sight of their caskets. School mates wailed uncontrollably while calling out the names of their dead mates. One casket contained the mortal remains of one sibling and her one-year-old child while the remaining three contained the rest. Assistant Headmaster of the St. Max Anglican JHS at Essikadu, where one of the deceased – Mary Commey – attended school said her death has affected the psyche of the school children. “Since the death of Mary [Commey], the school has not been the same,” she said. “Her classmates in particular have taken her death so hard [that] the class teacher has for the past two weeks been counselling the class.” Bridget Capson-Otoo, the class captain of Mary Commey, said her deceased mate was an affable student and “always punctual”. Sekondi-Takoradi Mayor Anthony KK Sam admonished the congregation to use the death of the five siblings to change their attitude towards where they build. “People are willing to build on waterways knowing very well the consequences will sometimes be deadly.” He added: “It is unfortunate that it is only when something dreadful happens that we have to learn a lesson. And like the death of these five siblings, sometimes we learn it the hard way.” “Never again will the assembly allow this to happen,” he assured. One of the siblings who survived the freak accident, Clement Arhin Snr, 13, is recovering from head wounds. 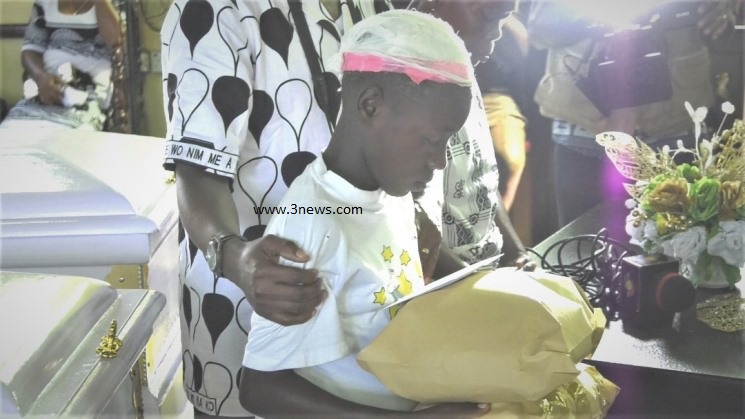 He attended the burial service with a bandage wrapped all round his head. He wailed uncontrollably. The Western Region Coordinating Council has taken care of all expenses the family will incur including hospital and mortuary expenses, caskets, ambulance and hearse expenses. Donations of varying sums were also made to the family on behalf of various personalities and interest groups. By Eric Adjei|3news.com|Western Region|Ghana]]>