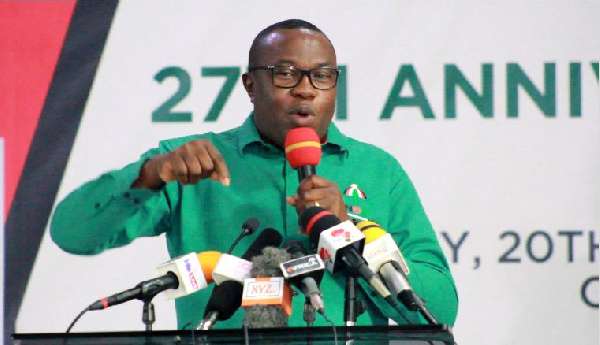 The chairman of the National Democratic Congress (NDC), Samuel Ofosu-Ampofo, has called on Ghanaians to vote the NDC into power in order to rescue the country from what he calls “affliction”.

Speaking at the party’s manifesto launch at the University of Professional Studies, Accra, on Monday, September 7, Mr. Ofosu Ampofo observed that the incumbent Akufo-Addo-led New Patriotic Party (NPP) government has lost its focus and thus needs to be replaced.

“We the citizens of this noble country are now at a critical juncture, we cannot sink any further than we have, we are at rock bottom, the incumbent is not only confused and exhausted, President Akufo-Addo is digging an even bigger hole  for which if not stopped we will all be buried alive”, he said.

He said the NDC has done its homework well and is ready to go into a contractual relationship with Ghanaians for which all citizens stand to gain. The party chair disclosed that their manifesto is a reflection of the needs of the people, something he describes as unconventional.

“In developing the NDC manifesto, the committee departed from the norm and went down to the people who provided the material that has been written down as our social contract when we assume the reins of government early next year”, he noted.

Mr. Ofosu-Ampofo is positive that the NDC will assume power come January 7, 2021.