Military and police personnel have seized placards bearing anti-government messages from protesters in Navrongo during President Nana Akufo-Addo’s tour of the Upper East Region Wednesday. Ahead of President Akufo-Addo’s visit to the Kasena Nankana Municipal Assembly, which is located few metres away from the former NDC constituency chairman’s residence, some NDC supporters lined-up the street with placards that summed up their issues with the President. Messages such as “Mr President, stop renaming and build your own”, “Mr President, we want dams not dugout”, Mr President, where is our one million dollars?” and “NPP is a scam” were held by the protesters along the street to the assembly. But the military and police officers were said to have been called in by the Defence Minister Dominic Nitiwul, to clear the protesters from the ground on the basis that those messages were against Nana Akufo-Addo and the government. A video footage sighted by 3news.com showed some military officers forcefully taking the messages which were written on papers, from the protesters and tore them apart. Some of the protesters were heard asking the officers whether Ghana was under military rule while asserting their democratic rights but the officers who appeared desperate would not budge. “Are we in a military rule or what?” one man was heard saying in the video captured by one of the protesters. Another angry man said, “You know what, we are now going to hoot at him [Nana Akufo-Addo”. One of the protesters went into a shop in an apparent move to prevent the officers from seizing his placard was chased by the soldiers and forcibly took the placard in a confrontational manner. [caption id="attachment_132825" align="aligncenter" width="349"] 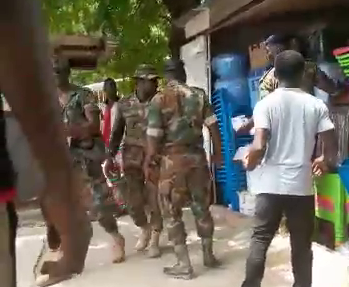 The shop[/caption] “This is more than a military rule; this is not democracy. Shame, shame!” a woman shouted. Ironically, the military and the police officers have since Tuesday when the President began his tour, allowed some persons with praise-singing placards to line up the streets of areas he visited. [caption id="attachment_132838" align="aligncenter" width="1000"] 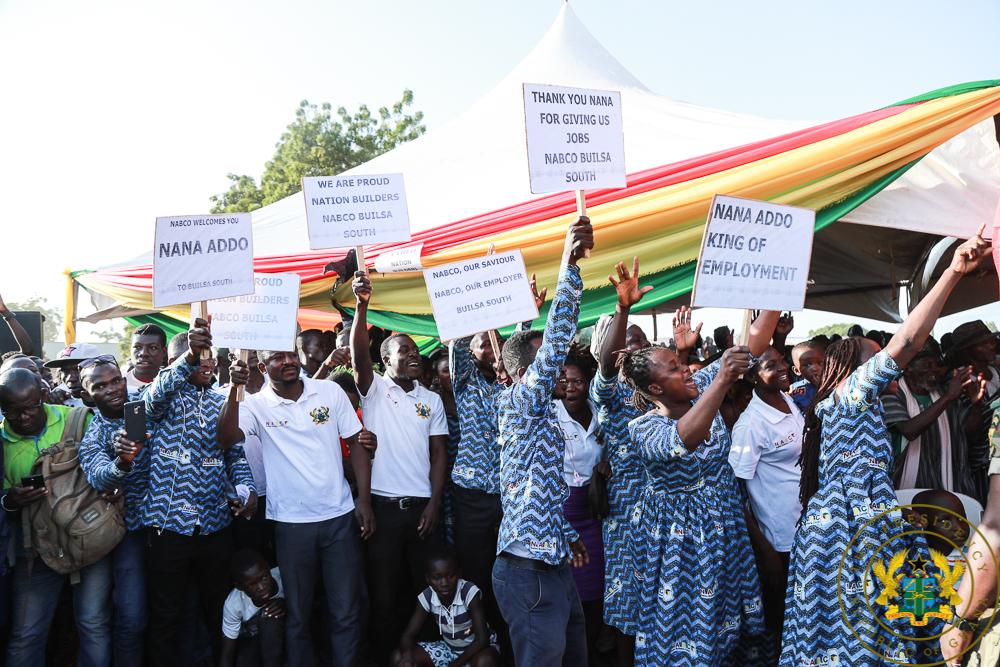 Some of the praise-singing placards allowed to be shown to the President[/caption] At Builsa South for instance, official photos released from the Presidency showed NABCO beneficiaries wielding nicely designed praise-singing placards for Nana Akufo-Addo, some of which read: “Thank you Nana for giving us jobs”, “Nana Addo, King of Employment”. The NDC Deputy Communications Officer for Navrongo Central, Kelly Alagewe Babere, claimed the military and police officers acting under the instructions ofMr Nitiwul. According to the NDC, some posters and banners of their aspirants in the upcoming primary were removed by members of the NPP prior to the President’s visit. But aide to the Member of Parliament for the constituency, Clifford Achari, justified the action by the security personnel, explaining the placards were deemed to be “against the government and the president”. He indicated that the protesters were first asked by the officers to either discard the placards or move away altogether, which they resisted forcing the officers to use force. For him, the operation was successful and peaceful, contrary to an earlier narrative by some members of the NDC that the protesters were brutalized.