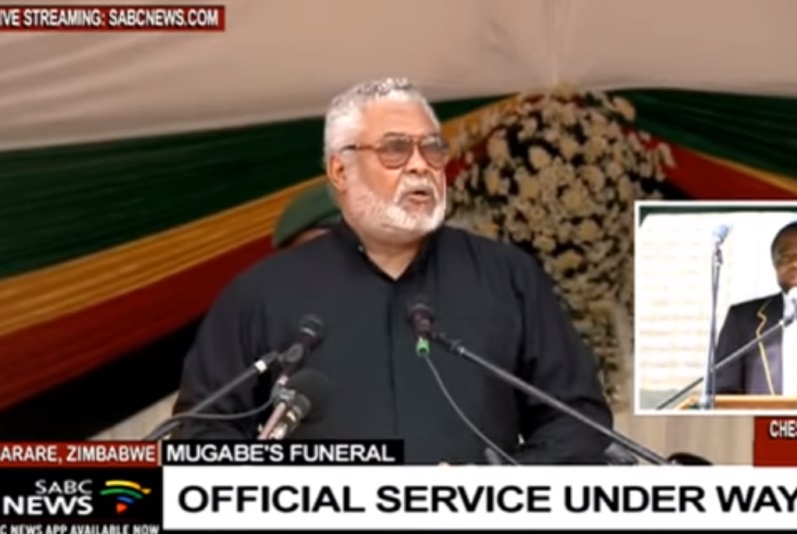 Former Ghanaian President, Jerry John Rawlings has eulogised Robert Mugabe as one of African’s “most formidable warriors”.  Paying a glowing tribute to the former Zimbabwean leader on behalf of government and the people of Ghana in Harare on Saturday, he saw Mr. Mugabe as a fearless leader who pitched his country at a prominent and enviable status globally. “He was not only a popular and fearless liberation fighter; Mugabe was not only a teacher, but most of all an impressive moral compass,” Mr. Rawlings recounted. Below is his full speech (video and text) We are here to join you to bid goodbye to one of the most formidable warriors in this continent. And I feel especially privileged to represent my country and President Nana Addo to deliver this humble tribute. I thank those who preceded me for what they also had to say. Ghanaians, especially those familiar with Africa’s epic struggle for freedom, justice and dignity, are greatly saddened by the irreplaceable loss of one of our continent’s most inspiring liberation fighters. He was not only a popular and fearless liberation fighter; Mugabe was not only a teacher, but most of all an impressive moral compass. Our enduring affection for Robert Gabriel Mugabe was equally rooted in the strong bonds of brotherhood that derived not only from his growing up, studying and teaching in Ghana but also from marrying a Ghanaian lady called Sally Francesca Hayfron. The wife of his youth, now interred in the Heroes Acre here in Harare supported him with youthful passion, energy and wit as he wrestled his native Zimbabwe from the throes of ruthless colonialism. Though Zimbabwe, unlike most African countries, shed the yoke of colonialism in 1980, through Robert Mugabe’s outstanding leadership the country came to assume a prominent and enviable status globally shortly after attaining independence. Until his demise, President Mugabe had consistently demonstrated his steadfast commitment to our shared vision of the Africa We Want as defined in the Agenda 2063 strategy document. His continuous presence and eloquent speeches in important international gatherings such as the African Union summits and the United Nations General Assembly invariably carried echoes of the vision of “An Integrated, Prosperous, and Peaceful Africa, driven by its own citizens and representing a dynamic force in the International arena.” From his fledging years as a politician until the twilight of his time, he never lost his oratory skills and sharpness of wit. It is doubtful if his most rabid critics could fault his dialectic deductions and power to convince. He clearly understood the internal and external forces that continued to obstruct Africa’s realisation of that vision and courageously did all he could to restrain them. Those who are familiar with the tragedies that have characterised much of Africa’s post-independence era will no doubt appreciate how the burning desire of Robert Mugabe to end colonial exploitation earned him the wrath of the same aggressive foreign interests that were responsible for discrediting and destabilising most of our progressive rulers. Our tears flow freely and uncontrollably for our departed hero. An untiring steward of African progress. A pioneer of Black assertiveness and an implacable opponent of Neo-colonialism. We salute his memory as his soul marches on to join the great patriarchs of our continent in eternity. On behalf of my President, Nana Addo and on my own behalf, I’d like to offer my heartfelt condolences to Madam Grace Mugabe and the family and children. Farewell great one and rest in peace. Source: 3news.com | Ghana]]>

Rawlings, the ‘Junior Jesus’: The Enigma of a Leader

I’m excited there’s a Ga Mantse in my time as president...