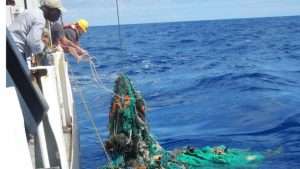 He expressed dismay that about eight million tonnes of plastics were dumped into the ocean annually, and cautioned that if urgent measures are not taken right now to address the phenomenon; by 2050 there would be more plastics in the ocean than aquatic life.

“Our national and continental strategies should take into consideration the environmental dimension of the blue economy so that we can together preserve our ecosystem,” Dr Bawumia emphasised.

The Vice President made the call in a speech read on his behalf by Mr Kwaku Ofori Asiamah, the Transport Minister, at the opening of the Sixth Women’s International Shipping and Trading Association (WISTA) Africa Conference in Accra.

The two-day conference is on the theme: “The Role of Women in Harnessing the Potential of Africa’s Blue Economy” attracted delegates and shipping councils from Ghana, Nigeria, Cameroon, Democratic Republic of Congo, South Africa, Central Africa Republic and Togo.

The event, which was graced by Mr Kitack Lim, the Secretary-General of the International Maritime Organisation, brought together women in the maritime transport, trading, logistics and management positions.

They would share knowledge, ideas and network towards developing an action plan that would aid in sustainable utilisation of the marine resources and ensure job creation.

The Vice President mentioned some reforms being implemented by the Government to enhance ports’ efficiency and ease of doing business, including the Single Window System, construction of four container berths and expansion of terminals at the Tema and Takoradi ports, to reduce revenue leakages and ensure faster turnaround time for goods and services.

He said maritime resources were pivotal towards Africa’s industrialisation agenda and diversification of her economies considering the 38 coastal countries on the Continent and, thus, called for sustainable utilisation to ensure collective development.

It is estimated that about 90 per cent of the import and export volumes in Africa are through maritime transport.

Vice President Bawumia reminded the gathering that the 2015 Maritime Strategy adopted by stakeholders examined maritime safety, infrastructural development and fisheries and aquaculture, while recognizing the need for countries to comply with the laws of the sea.

He was of the conviction that those measures were crucial towards accelerating socio-economic development and underlined the need to harness the maritime industry sub-sectors such as shipping, logistics, insurance, tourism, fishing and aquaculture to bolster the economies of Africa and to create jobs.

Dr Bawumia acknowledged the role and contributions of women in the sector over the years.

However, he bemoaned the low number of the female workforce, constituting only two per cent globally, and called for drastic measures to change the statistics by advancing women’s participation in the sector.

He said government was empowering women to play a critical role in the maritime sector and cited the appointment of Madam Sandra Opoku, the Director of Tema Port and Madam Benonita Bismarck, the Executive Director of the Ghana Shippers Authority, to decision-making positions as a case in point.

Mrs Jemilat Jawulaa Mahama, the President of WISTA-Ghana, in her welcome address, said the conference was a defining moment in Africa’s quest to industrialise and diversifying her economies through sustainable exploitation of natural resources.

She noted that the first global conference to discuss the “Blue Economy” (Ocean Resources) was held in September last year in Nairobi, Kenya, for sustainable use of the sea resources.

He explained that the ocean provided an avenue for ensuring food security of millions of people and survival of humanity with estimated an value of 1.5 trillion dollars, therefore it was prudent for global leaders, governments and individuals to recognize the essence of preserving the marine environment and maximise its potentials.

Some of the topics outlined for discussions include African Ports and Maritime Pollution Matters, Role of Trade Facilitation in Promoting Africa’s Intra Africa Trade, Securing the Blue Economy through and Effective Regulatory Enforcement Framework, Sustainable Fisheries and Aquaculture and Transport Logistics in Africa: Challenges and the Way Forward.