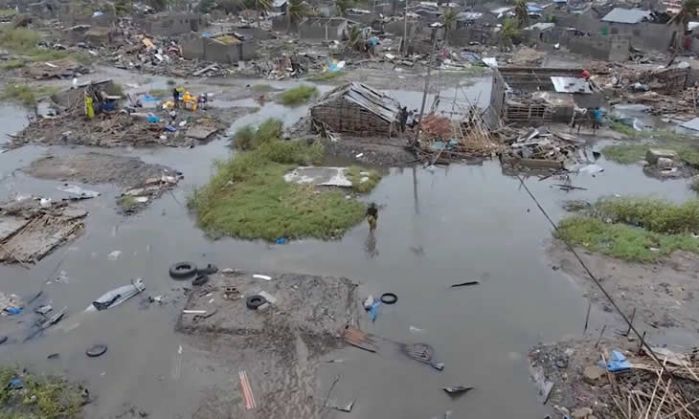 The United Nations Development Programme (UNDP) is stepping up its support to help Malawi, Mozambique and Zimbabwe to rebuild lives and fast track early recovery, rehabilitation and reconstruction after Cyclones Idai and Kenneth. Within six months of the two devastating cyclones, UNDP has mobilized over US$ 60 million to provide additional support for the affected communities. The two cyclones hit the coast of Mozambique between March and April 2019, killing hundreds of people and leaving about 1.85 million people in Mozambique homeless and without basic necessities and infrastructure. Cyclone Idai also caused significant flooding, damage and destruction of homes, resulting in numerous deaths in southern Malawi as well as in eastern Zimbabwe. Following these disasters, the United Nations in support of the Governments of these three countries launched humanitarian appeals. UNDP started by supporting recovery including debris clearance; reconstruction of more weather-resilient houses; and rapid restoration of livelihoods. In addition, UNDP quickly deployed additional technical expertise to support the early recovery efforts including formulation of Post-Disaster Needs Assessments in both Malawi and Mozambique, along with the EU, UN, World Bank and African Development Bank (AfDB). UNDP has since intensified its resource mobilization drive to help the largest number of affected people to restore their lives and livelihoods. Recognizing its competence in this field, various development actors have partnered with UNDP in making major commitments to help the affected populations. So far, the US$60 million mobilized includes commitments from the European Union (EU) (35 million Euros for Mozambique); China (US$5 million: US$1 million for Malawi, and US$2 million each for Mozambique and Zimbabwe); World Bank (US$2.3 million for Zimbabwe) as well as other commitments yet to be announced. The proposed interventions will support the restoration of livelihoods and reconstruction of more resilient infrastructure such as schools, houses, clinics, markets, damaged irrigation structures, potable water systems and provide means for a sustainable reconstruction. Building on UNDP’s added values and its capacities to deliver at scale, as well as on similar initiatives in crisis and post-crisis contexts, UNDP is working with various partners to establish stabilization facilities to facilitate recovery efforts. In Mozambique, UNDP along with the Government have established a Recovery Facility to fast track recovery and build resilience following the devastation unleashed by Cyclones Idai and Kenneth. The main pillars of this innovative programme are focusing on livelihoods and women economic empowerment; housing and community infrastructure; and institutional strengthening of the reconstruction cabinet.

Similarly, in Zimbabwe, with thanks to the Zimbabwe Resilience Building Fund, which is also UNDP-supported initiative, UNDP experts are working with smallholder farmers, to address food insecurity and economic challenges. In addition, UNDP is partnering with the World Food Programme (WFP) to provide cash assistance for the most vulnerable populations in Zimbabwe. Together with the World Bank, UNDP in Zimbabwe is also supporting the government to develop a Recovery and Resilience Framework. Moreover, in Malawi, UNDP is helping to repair and build back better community infrastructure damaged in the floods, including irrigation channels and water access points. UNDP has also partnered with the Malawi Red Cross Society and Habitat for Humanity Malawi to construct climate-resilient homes for the most vulnerable. The “build back better” approach adopted by UNDP focuses on early action to help restore lives in a sustainable manner. With increased support from partners, many of these internally displaced populations can now have access to basic infrastructure and return to better lives. In all three countries, UNDP has supported the governments in the development of national recovery plans andis helping to mainstream disaster risk reduction in the national planning and budget exercises. It is also extensively partnering with private sector organizations benefiting from their skills, capacities and receiving their material inputs to build back better. Cyclones Idai and Kenneth teach us valuable lessons, stressing the importance of intensifying investments in disaster risk reduction and on the need for Governments to have the capacity to build infrastructures with climate resilience in mind. They also teach us that, building resilience does not only mean planning at the national level, but also at the community level. This is the essence of UNDP’s approach to build back better, focusing on people. There is a clear recognition that the devastating effects of the two cyclones that have resulted in billions of dollars in damage and loss, serve as a reminder that climate change threatens to unravel hard-won development gains. Therefore, building back better with climate resilience in mind and with a people-focused approach is not an option, but an imperative. At the same time, this cannot be done without critical resources. UNDP is grateful for the support from its partners so far and remains committed to an enduring partnership to rebuild lives.

READ ALSO:  Rugby birds of prey ready to battle for the spoils in Ghana
Source: UNDP/3news.com]]>