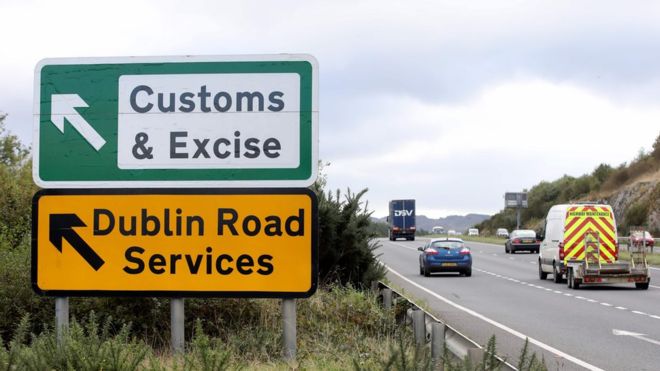 The government has delivered its new Brexit proposals to the EU, including plans to replace the Irish backstop.

The plan, outlined in a seven-page document, would see Northern Ireland stay in the European single market for goods, but leave the customs union – resulting in new customs checks. The Northern Ireland Assembly would get to approve the arrangements first and vote every four years on keeping them. The European Commission said there had been progress but “problems” remained. Irish Prime Minister Leo Varadkar said the new blueprint did not “fully meet the agreed objectives of the backstop”, in terms of upholding the EU’s single market, protecting peace in Northern Ireland and supporting economic co-operation with the Republic of Ireland. But he said he wanted an agreement and talks would continue. The UK is set to leave the EU on 31 October and the government has insisted it will not negotiate a further delay beyond the Halloween deadline. Speaking at the Conservative Party conference earlier on Wednesday, Boris Johnson said the only alternative to his Brexit plan was no-deal. In a letter to European Commission’s president, Jean-Claude Juncker, the prime minister said the new proposals “respect the decision taken by the people of the UK to leave the EU, while dealing pragmatically with that decision’s consequences in Northern Ireland and in Ireland”. Government sources hoped the UK might be able to enter an intense 10-day period of negotiations with the EU almost immediately, with the aim of coming to a final agreement at an EU summit on 17 October. Mr Juncker welcomed what he said were “positive advances” in some areas but he said the UK’s proposed system of “governance” of the new arrangements was “problematic” – and customs rules remained a concern. Arlene Foster, leader of Northern Ireland’s Democratic Unionist Party, supported the plan, saying it would allow Northern Ireland to leave the customs union and single market at the same time as the rest of the UK. Several Conservative MPs who opposed Theresa May’s agreement also signalled their likely support, with leading Brexiteer Steve Baker saying he was “cautiously optimistic”.
READ ALSO:  Boris Johnson defends Brexit plan and 'row' silence
But Sinn Fein said the plans were a “non-starter” and accused the DUP, their former power-sharing partners of “working against the interests of the people” of Northern Ireland. And Labour leader Jeremy Corbyn said the deal was “not acceptable” and “worse” than Theresa May’s agreement, as it “undermined” the Good Friday Agreement that secured peace in Northern Ireland. What is in the proposals? The prime minister has set out details of his plan to replace the Irish border “backstop” in the current Brexit agreement. The backstop is the controversial “insurance policy” that is meant to keep a free-flowing border on the island of Ireland but which critics – including the PM – fear could trap the UK in EU trading rules indefinitely. Under Mr Johnson’s proposals, which he calls a “broad landing zone” for a new deal with the EU:
READ ALSO:  Brexit: UK will reject any delay offer, PM to tell Juncker
The government is also promising a “New Deal for Northern Ireland”, with financial commitments to help manage the changes. German Chancellor Angela Merkel, who has spoken to Mr Johnson, said the EU would study the proposals carefully. She said she “trusted” the bloc’s Brexit negotiator Michel Barnier to maintain European unity. But opponents of Brexit in Parliament indicated they would not support the proposals, unless they were accompanied by the promise of another referendum. The Liberal Democrats, who want to stop Brexit, said the proposals would deal a “hammer blow” to the Northern Irish economy. The Scottish National Party dismissed the proposals as “window dressing”. BBC]]>

[3News Live] No passage for dead bodies around palace – New...