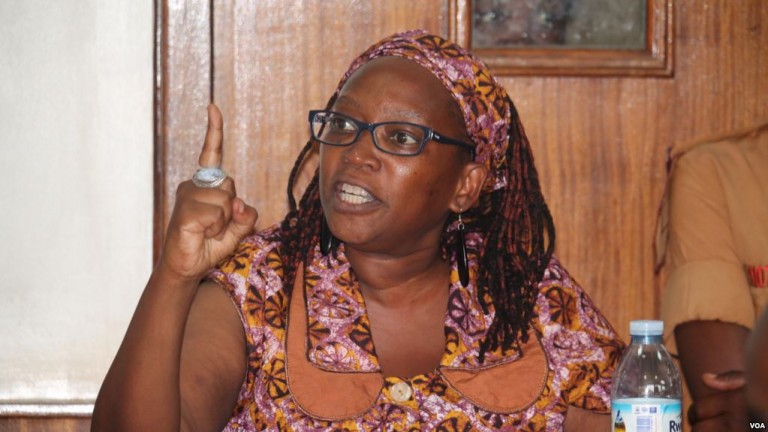 A Ugandan academic who once called President Yoweri Museveni a “pair of buttocks” has been sentenced to 18 months in prison.

Activists condemned the jailing of Stella Nyanzi for cyber harassment, saying it undermined Uganda’s commitment to freedom of expression.

She attended Friday’s sentencing via video link, against her will, and exposed her breasts in protest.

She was acquitted on a second charge, of “offensive communication”.

But when this was announced on Thursday, she gave a passionate speech in which she said she was disappointed with that verdict, prompting cheers from her supporters.

“I intended to annoy Yoweri Museveni. We are tired of his dictatorship”, she was quoted as saying.

Uganda has a poor record on freedom of expression according to Reporters Without Borders, which says President Museveni “tolerates no criticism”.

Nyanzi, 44, is an accomplished researcher who previously lectured at Makerere University, one of East Africa’s most prestigious institutions.

She is known for her frequent anti-government posts on Facebook, some of which take the form of poems, and which are often laced with profanity.

“My presence in your court as a suspect and prisoner highlights multiple facets of dictatorship. I exposed the entrenchment of autocracy,” she wrote in her most recent post, about the court case. “I refuse to be a mere spectator in the struggle to oust the worst dictator.”

Her cyber harassment convictions relates to a Facebook of last year in which she said she wished Mr Museveni, 74, had been burned up by the “acidic pus” in his late mother’s birth canal.

Rights groups Amnesty International has called on the Ugandan authorities to overturn the verdict and free Nyanzi, who has been detained in jail since November 2018.

“This verdict is outrageous and flies in the face of Uganda’s obligations to uphold the right to freedom of expression… and demonstrates the depths of the government’s intolerance of criticism,” said Amnesty’s East Africa Director Joan Nyanyuki.

Nyanzi has previously been arrested for another Facebook post, in which she referred to the president as a “pair of buttocks”. She is still on trial in that case.