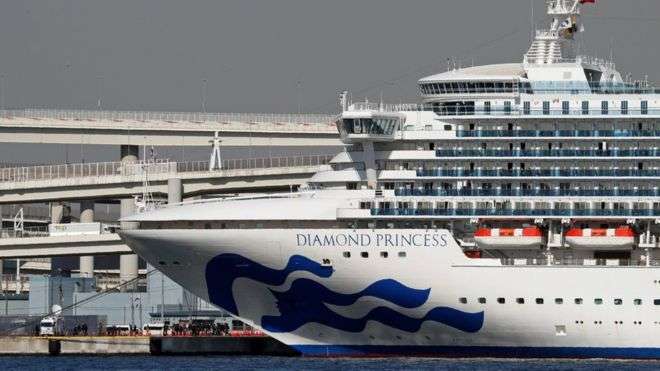 Two Japanese passengers who contracted the Covid-19 virus onboard a cruise ship quarantined in Japan have died.

One passenger died from Covid-19, while the other died from pneumonia, said local reports. Both were in their 80s and had underlying health conditions.

They had already been taken off the Diamond Princess last week and were being treated in hospitals.

At least 621 people on the ship tested positive for the virus, the biggest cluster outside mainland China.

Japan’s Health Minister said both passengers were sent to medical facilities when they showed symptoms.

The Diamond Princess was carrying 3,700 people in total and passengers who tested negative for the virus began leaving the ship on Wednesday after a 14 day quarantine.

Hundreds have now disembarked from the cruise. Others are set to leave over the next two days.

More than 150 Australian passengers have already arrived in Darwin, where they will begin two weeks of quarantine.

The first batch of people from Hong Kong have also flown back to the city, where they will similarly be quarantined.

British Foreign Secretary Dominic Raab said the 74 Britons onboard the ship would be flown home on Friday. Indonesia is also set to repatriate its citizens.

But there are fears and criticism over Japan’s handling of the quarantine on the Diamond Princess.

Japanese health expert Kentaro Iwata, professor at the infectious diseases division of Japan’s Kobe University, visited the Diamond Princess and said the situation on board was “completely chaotic”.

“The cruise ship was completely inadequate in terms of infection control,” he said in a widely shared YouTube video which he has since taken offline.

US officials have also said moves to contain the virus “may not have been sufficient”.

But on Thursday, Japan’s health minister responded to Mr Iwata’s criticism, saying authorities had worked hard to deal with a very complicated situation.

“We’ve been doing our best in the circumstances,” said Katsunobu Kato.

Meanwhile China, where the outbreak began, has seen a sharp drop in the number of new infections.

There were 394 new confirmed cases and 114 deaths reported on Wednesday, down from 1,749 new cases on Tuesday, the National Health Commission said.

Overall, there have now been 2,118 deaths and more than 75,000 confirmed infections recorded in mainland China. About 16,000 patients have recovered.

There are more than 1,000 cases outside of China with the biggest cluster on the Diamond Princess in Japan, followed by Singapore, South Korea and Hong Kong.

Iran says two people infected with the virus have died in the city of Qom – the first reported deaths in the Middle East.

France, Japan, the Philippines and Taiwan have each had one death attributed to the virus.

South Korea on Thursday announced a jump of 31 confirmed Covid-19 infections – 23 of them from a newly identified cluster at a large religious community. South Korea now has a total of 82 confirmed cases.

The cluster is in the south-western city of Daegu – home to 2.5 million residents – and is believed to be linked to a 61-year-old woman who was confirmed to be infected earlier this week.

The Korean Centre for Disease Control said that the woman had contact with 166 people, who were asked to self-quarantine, South Korea’s Yonhap news agency reports.

The religious sect known as the Temple of the Tabernacle of the Testimony, which has been accused of being a cult, said it had shut down the Daegu branch and that services in other regions would be held online or individually at home.

The mayor of the city has described the event as an “unprecedented crisis” and urged people in the city to stay indoors.

Air France-KLM plans to cut more than 7,500 jobs at its French arm as the airline industry reels from the...

Ghana’s coronavirus record has gone up by 390 new cases taking the national tally to 17,741 positive cases. The number...

Ethiopian ‘aged over 100’ recovers from Covid-19